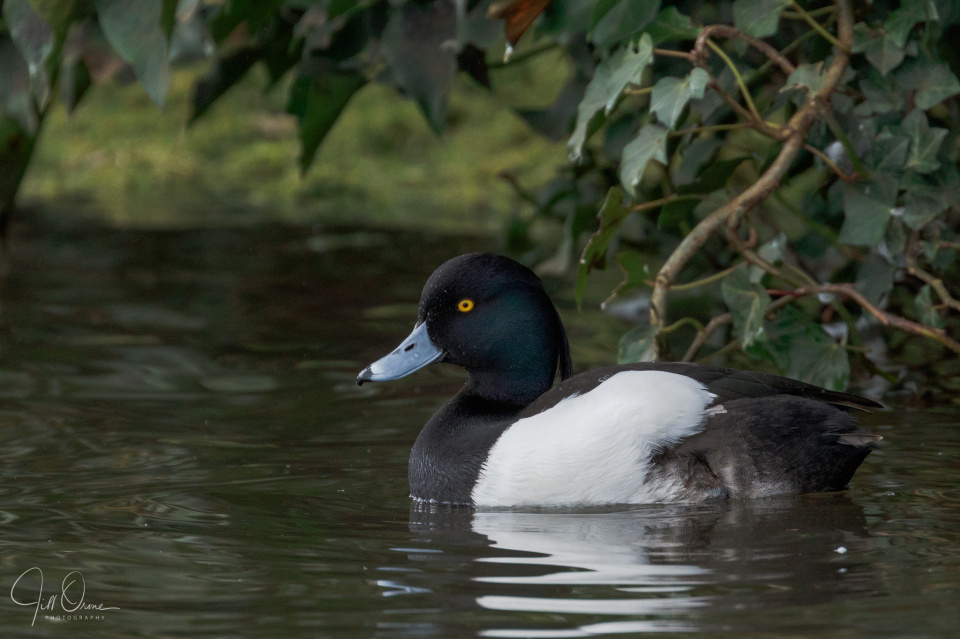 Lucky for me that is – I’m not so sure about the duck.

I went to Stratford this morning to have my eyes tested, and because it turned out that I needed exactly none of the rush hour time cushion I’d allowed myself (rush hour apparently no longer being a thing around here), I found myself with twenty minutes to kill before my appointment. Walking into town along the north bank of the river, I paused at the chain ferry landing to photograph an incoming flight of swans, and as I lowered the camera and glanced down at the river I spotted this tufted duck.

If you’ve been following my nonsense for any length of time, you’ll know that tufties are winter visitors to the Avon at Stratford. The earliest I’ve ever photographed them here is around the middle of September, though early October is more usual, and they’re generally gone again by the middle of February. There is a breeding population of tufted ducks in the UK, but they tend to favour lakes and reservoirs, so it’s more likely that the ones we see here are some of the migrants from Iceland and northern Europe that swell the UK population four-fold during the winter months.

Tufted ducks are clubbable out of the breeding season, and gather and move around in flocks, so it’s unusual to see one on its own like this. I checked the rest of this stretch of river and found no others, so it’s possible that this male became separated from a migrating flock in the recent gales, and came down on the river to rest and feed. He’s currently hanging out with some unpaired mallards – and courting the female of the group quite enthusiastically, to her apparent bemusement – but if another flock of tufties goes over the area and he hears the females calling (as they tend to do in flight), he should be able to join up with them.

In other news, I passed my eye test with flying colours – the sight in my dominant eye has actually improved a little, to everyone’s surprise. It’s always a good day when you escape from the optician’s without new pairs of reading and computer glasses and an astronomical bill.