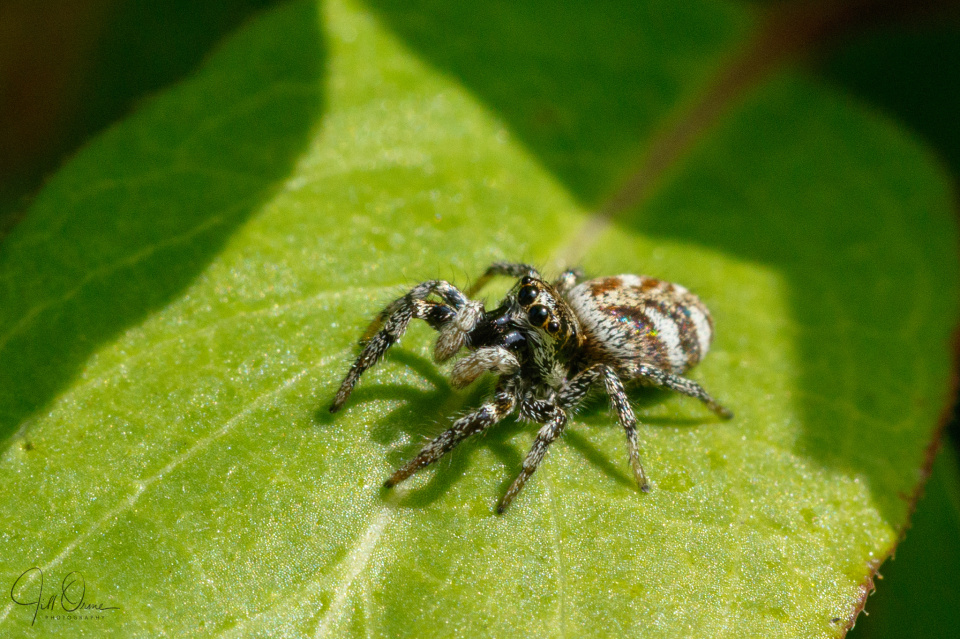 “Even I have to admit,” said R, looking over my shoulder just now, “that that is quite cute.” Which is especially pleasing, given the way he shuddered when I first showed him my photos on the back screen of the camera this morning.

Personally I don’t know how you could fail to find those eyes enticing, though I admit that if they were the last thing you saw before getting eaten, you might take a rather jaundiced view. But given that this little zebra spider was only about 6mm in length, I didn’t feel threatened even when she reared right up at me – which I gather from reading up on these tiny jumpers is something they do to get a really good look at you, rather than because they’re trying to get you to back off. They have eight eyes, four of which are set back on the sides of the cephalothorax, and are thought to be non-focusing and specialised for the detection of movement. It’s the four front-facing eyes that allow the fine, binocular vision needed to identify prey and judge the angle and distance of a jump, or to assess an approaching human to decide whether or not they’re a threat.

I spent quite a lot of time this evening trying to identify my subject to species level, but according to the experts this can only be done reliably via microscopic examination of the genitalia, and she and I weren’t well enough acquainted for that. I do know that she’s a Salticus, and she’s most likely to be S. scenicus, which is the commonest of the three species of this genus that we have here in the UK. (My own feeling, for the very little that’s worth, is that she looks more like S. cingulatus, but I’ll probably never know for sure.) I also know that she’s female because her chelicerae – the shiny black mouthparts below her headlamp eyes – are a sensible size: in male Salticidae they’re elongated and project forwards, because as well as feeding they’re used for fighting other males for the right to mate with a female.

Should you be arachnophobic, I’ve also posted a photo of a ladybird unpacking its wings pre-flight – although of the two it’s actually the ladybird image that discomfits me slightly, because the beetle looks so naked with its protective wing cases opened that it feels somehow voyeuristic to be staring at it. Nonetheless, it is interesting, I think, to see that mechanism in action. 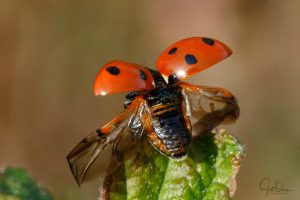 Both these photos were taken with a 13mm extension tube added to my 100mm macro, to give extra magnification. Today was my first foray into super macro, but I had a lot of fun playing with the technique and I’ll definitely be doing some more – and probably using bigger tubes – in the future.