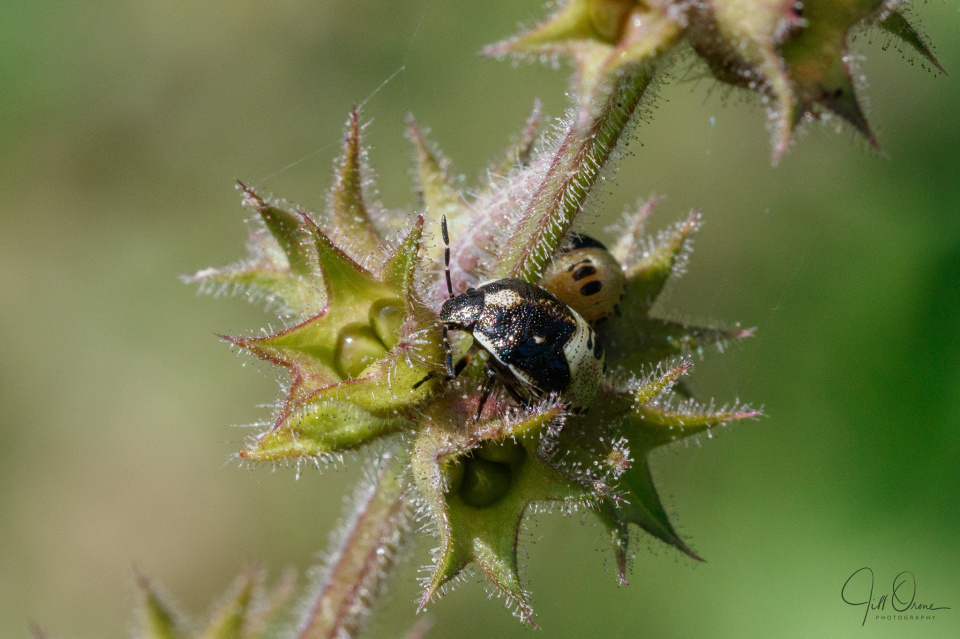 The hedge woundwort is going over and looking increasingly shabby, and on the principle that if it wasn’t providing nectar for the bees there wasn’t much point in keeping it, I’d been gearing myself up towards pulling it out and composting it. But a couple of days ago, while chasing a Wool Carder around the few remaining flowers, I realised that quite a few of the little spheres I’d assumed were seeds were actually wandering around on the plants, and on closer inspection they turned out to be Woundwort Shieldbug nymphs.

Anyway, the hedge woundwort is reprieved, until at least some of the nymphs are fully developed, which at the rate they seem to be moulting probably won’t be too far in the future. In this shot the closer bug to the camera is a 5th or final instar nymph – evidenced by the outlines of a rudimentary shield and wing cases – so one more moult will bring it to adulthood. The little chap in the background is a younger model – a 2nd or 3rd instar nymph I think, though I’d need to see the front end to be sure – and on other plants I have younger ones still. I would like to know how fast they grow, but haven’t been able to track down an answer to the question, so I guess I’ll just have to find out by observing them over the next few weeks.