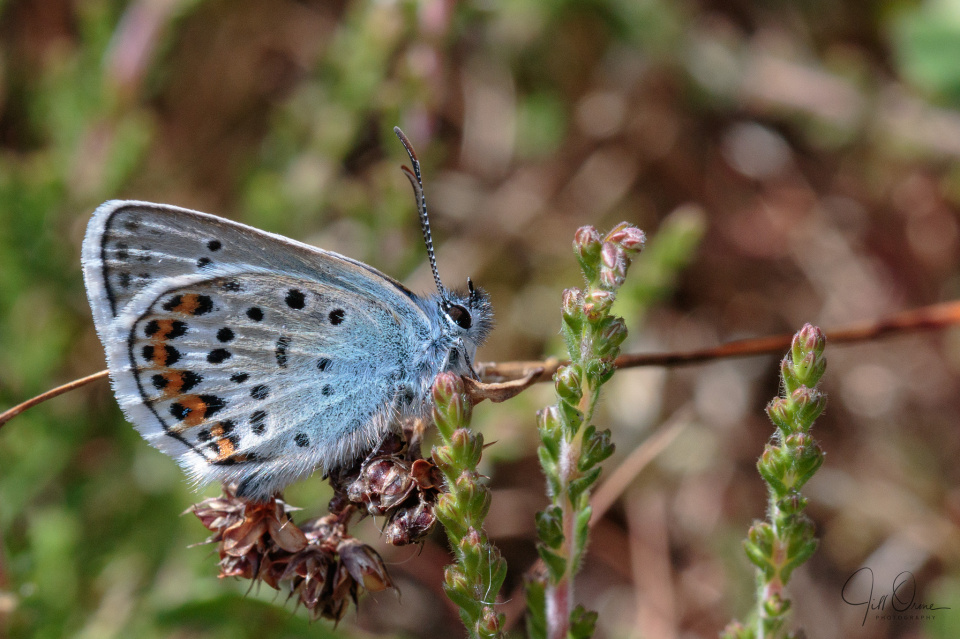 Whatever – I was just glad that this little chap perched somewhere that I could get to without lying prone; I don’t mind lying prone, as long as there are no witnesses to my inelegant return to the vertical, but the ground was covered in ants, and the flipping things get everywhere when they decide to investigate you. For the first half hour I was at Prees Heath this morning I tried to persuade the SSBs to stop nectaring on bird’s-foot trefoil and try a nice big thistle instead (“You’d look fabulous against that purple! Or look – a beautiful white campion would set you off perfectly!”), but they were having none of it. They were also restless and combative, both with each other and with bigger butterflies – one even flew at a fresh Painted Lady, which was an unequal battle if ever I saw one – and I was struggling to get anything other than distant shots with the long lens. But after watching them for a while I started to get to know their behaviour, and to be able to predict when they might be more approachable: females are quieter than males, I found, and thus easier to creep up on, and both sexes tend to settle as soon as the sun goes behind a cloud, resting on a warm surface with their wings spread and turned towards it, waiting for it to emerge again. I’ve put a basking shot on my Facebook page, if you’d like to see the lovely upper surface colouring of a fresh male.

Speaking of ants, the life cycle of this butterfly is fascinating, because it relies on a close relationship with black ants: the ants protect the larval and pupal stages of the butterfly, right through to its emergence, and in return the Silver-studded Blue secretes a sweet fluid from a special gland, on which the ants feed. I watched an ant climb all over a resting butterfly today, and the SSB remained completely relaxed while it was checked out. There’s quite a good explanation of all this, and a really interesting short film, on the web page for the Prees Heath Reserve, if you’d like to know more.

After a thoroughly successful morning I felt that I was on a roll, so I zoomed over to Whixall Moss, just seven miles from Prees Heath, in search of a White-faced Darter. I didn’t find one, but I did get sunburn, so I’m now wishing that I’d banked my butterflies and gone straight home – or maybe over to Carding Mill Valley, where I might have got a Golden-ringed Dragonfly, and could certainly have got a cup of tea and some shade. Interestingly, I also didn’t find Hillyblips, though (quite coincidentally) she was at Whixall at the same time as I was, and parked in the same car park – but I’m pretty sure I also met the Large Heath she’s posted this evening.