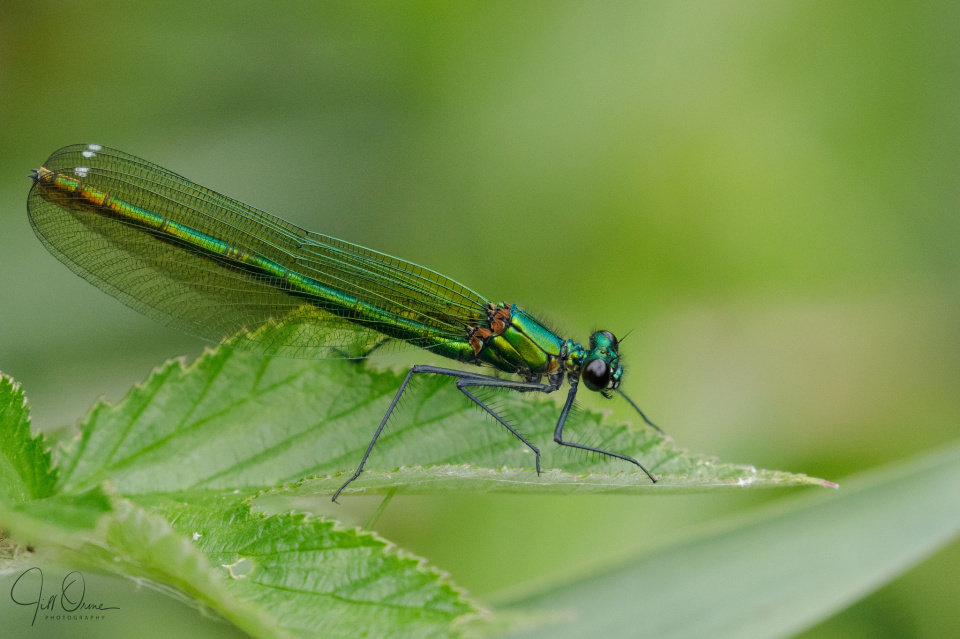 Describing Calopteryx virgo, the other British species of demoiselle, Brooks and Cham say, “Although the metallic green females are spectacular in the hand, they are very cryptic against bankside vegetation.” That’s not a use of the word cryptic I’d ever come across before, though the meaning was clear from the context, but on looking it up I found that in zoology it’s a term used in describing camouflage. So I learned something new today.

I’m going to assert that this female Banded Demoiselle (Calopteryx splendens) manages to be both well-camouflaged and spectacular. If anything, she’s probably even more cryptic than her cousin the Beautiful Demoiselle, whose wings have a bronze tint – though otherwise the two females are hard to tell apart. Males are much easier: both are blue, but only the Banded Demoiselle has striped wings. There were a lot of males in Dragonfly Alley at Brandon Marsh today, but only one of them was prepared to let me get close; I’ve put a photo on my Facebook page that shows him dropping back down onto his favoured perch after leaping for a fly, which I’m sorry to say he didn’t catch – I was being bitten half to death by flies at the time, and every time I saw a demoiselle take one out of the air I gave a little silent cheer.

On my way home from Brandon Marsh I swung round to Oversley Wood, in search of one very large and one very small butterfly; sadly neither the White-letter Hairstreaks nor the Purple Emperors were out and about, but in looking I did push my step count to a height it hasn’t reached in a while. I only took two photos while I was there, and I’ve added one of them as an extra because I really like it, for reasons I can’t fully explain; it’s a long lens shot of a Large Skipper, resting on fresh bracken.

On another day the Large Skipper might easily have been my blip – in fact, I’m now wondering if it should have been…. but that would mean rewriting the post, and I don’t like it quite that much. Probably… Anyway, either of these invertebrates is a credible entrant for Tiny Tuesday: the Banded Demoiselle is about 5cm long, and the Large Skipper has a wingspan of about 3.5cm.