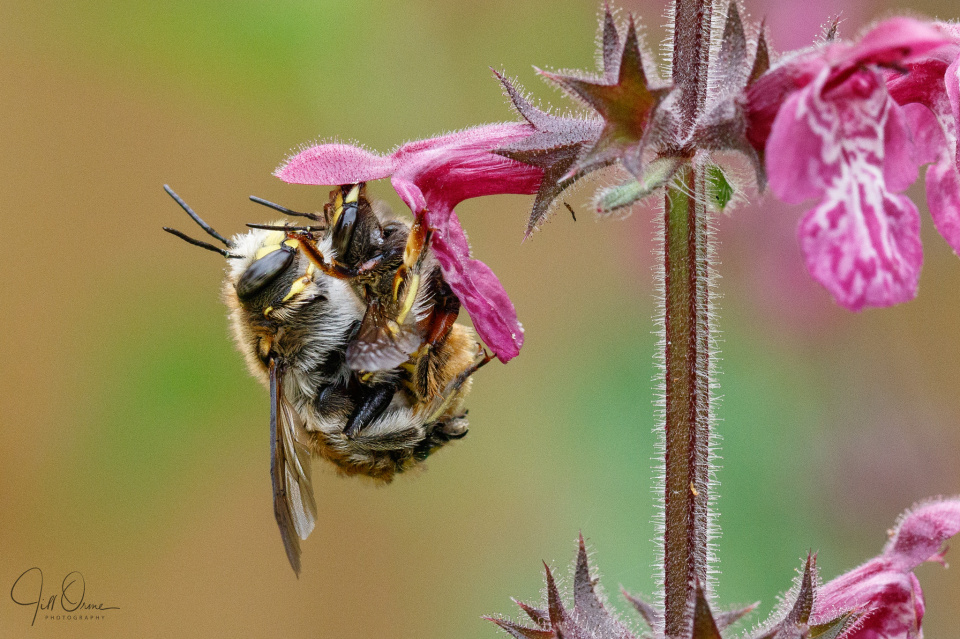 I was watching a Wool Carder noodling through the hedge woundwort, thinking that it was smaller than I remembered, and half-forming the thought that it might be a female, when a second one swooped in and pounced. I think it would be accurate to say that in most species of bee the male is smaller than the female, so presumably when it comes to courtship they have to rely on speed and manoeuvrability. The male Wool Carder, though, is appreciably bigger than the female, and his technique tends more towards brute force and ignorance.

On the assumption that the male here was the same bee I photographed yesterday, I was pleased to see him getting to fulfil the biological imperative so soon after his arrival in the garden. And given that the mating process lasted just twenty seconds, and was so active that the entire plant was moving, I was too busy trying to record it to notice the details of what was happening. It was only when I uploaded my photos and began working on them that I counted limbs and worked out that while they were both holding on to the flower with their middle legs, she had her forelegs flung outwards in what I’m anthropomorphically calling a gesture of surrender, while he had his front claws firmly dug into her face. If you have the stomach to view this full-screen, you’ll see the gory details.

It’s an effective strategy obviously, but I’m not going to pretend to approve of it, and I fear that Mr Wool Carder may just have slipped off my Top Ten Favourite Bees list. Temporarily, at least.