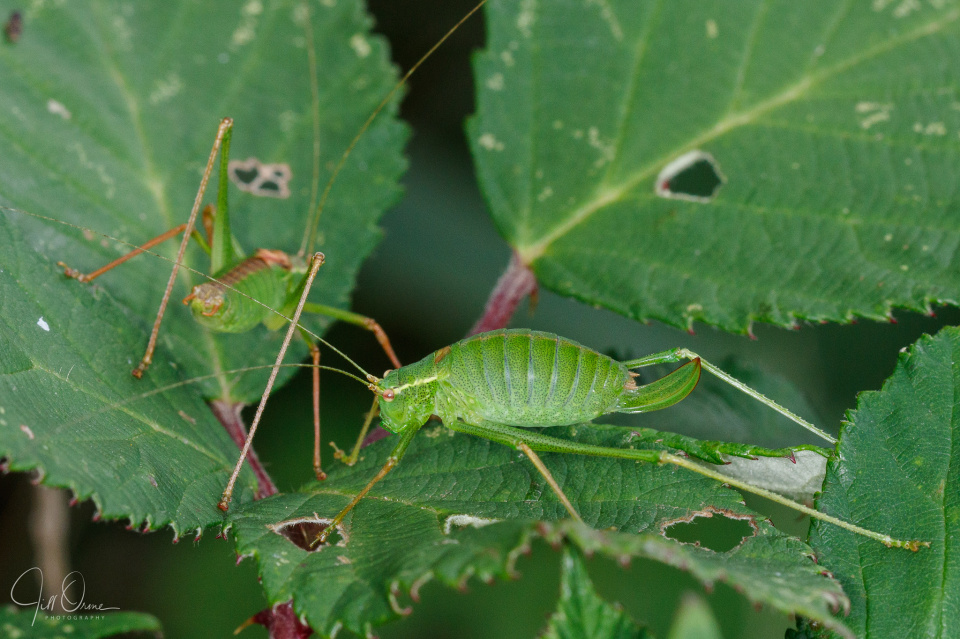 Well. This was a lucky find. And I’m not even talking about the female speckled bush cricket in the centre of this rather messy image.

I was out in the village this afternoon, photographing ivy-feeders around the hedgerows, when my camera battery died. Cursing my stupidity for not having checked the level before I left home, I looked around to calculate the quickest route back to the house, and realised that I was just a couple of metres away from a stile into a field, with a footpath running across it that I’ve never felt the need to use before, but which I saw would take me home in an almost straight line.

I climbed into the field, which I’ve always found mildly interesting for the fact that it has mediaeval ridge and furrow ploughing patterns running across it, but which has never seemed to offer much in the way of invertebrates because it’s usually grazed. I’m lining up my excuses here, you understand, and trying to downplay the embarrassment I felt when I discovered – a mere twenty one years after moving into the village – that there’s a pond in this field. Right next to the footpath. An actual, proper pond. Not a sump, though it is flood plain, but a pond, with reeds and bulrushes. And dragonflies. About quarter of a mile from my house.

So anyway, I scuttled home, grabbed a battery, shared the story of my amazing discovery with R, and set off back the way I’d come. Only to bump into a neighbour and become engaged in a really interesting conversation about – well, never mind. Suffice it to say that by the time I’d heard all the scandal, said goodbye, and made it back into the field, the light was gone and so were the dragons.

But because I was there, and had the ring flash, I thought it was worth having a little rummage in the vegetation around the pond edge, in case there was anything else of interest to be discovered. And lo! Two speckled bush crickets, on some mucky, chewed old bramble leaves. Try as I might (and did), I couldn’t make an attractive image out of this scene, but I still thought it worth blipping because I rarely see a female, and I’m pretty sure I’ve never posted a photo of one before. All the ones I’ve found in my garden over the past three weeks have been males, and though I have nothing at all against them, I do love the female’s scythe-like ovipositor, which she will use to lay her eggs in tree bark or plant stems.

I had hoped that YouTube might provide a film of the oviposition process that I could share with you, but sadly it seems that no-one has posted one. There is, though, a charming film of a female speckled bush cricket eating a dahlia, which I think you might enjoy; I could happily watch it all day.