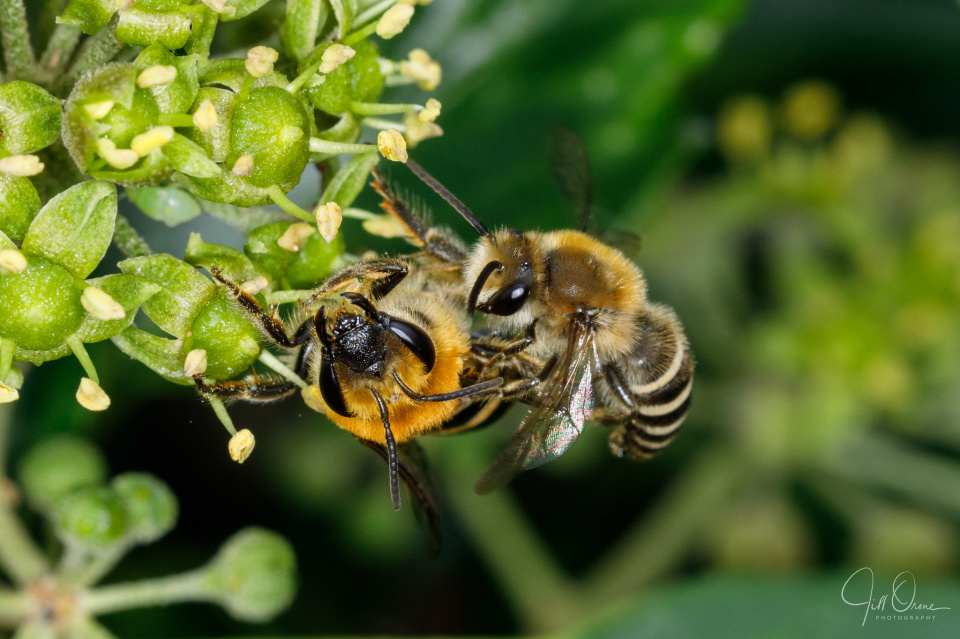 Having posted the sad sight of a predated ivy bee yesterday, I’m happy to be able to bring you a couple today that were very much alive.

I took a lunchtime walk around the hedgerows in the village, and found many more open ivy flowers than yesterday, and consequently more insects. I’d already counted a dozen or so male ivy bees when the specimen on the left here landed in front of me, and I immediately recognised her as a female of the same species. This doesn’t make me any kind of bee expert – if you take a look at the side view I’ve posted as today’s extra, and compare it with the male on the right here and the fresher one I posted a few days ago, I’m sure you’ll agree that she’s the same, and yet distinctly different. She’s a lot bigger, for one thing – about the size of a honey bee, whereas the male is both shorter and slimmer. She has conspicuous patches of tawny hair at the sides of her first abdominal segment, and long, pale hairs on her hind legs for collecting the pollen with which she’ll provision her nest. 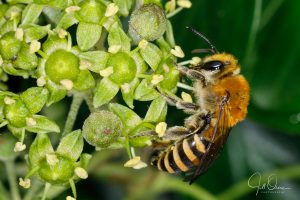 Within a couple of seconds of her arrival the female was approached by a male, which she shook off, and from then on she was jumped every few seconds. Luckily I had the ring flash on the camera, and was able to capture one of these attempted matings, none of which was successful. One of the best-known facts about ivy bees is that the males emerge from their nest cells first, and from then until the emergence of the females groups of them will hang around the nest aggregations, waiting for their chance to mate. As soon as a female comes out of the nest she will be mobbed in what’s referred to as a mating cluster or a mating ball, within which only one male will actually succeed in copulating with her. She will not mate again, and as males always outnumber females, most males will never manage to mate at all. This, unsurprisingly, doesn’t prevent them from trying their luck when they happen across a foraging female, but it’s highly unlikely that they’ll find one who wasn’t mated straight out of the nest.

There’s a video of a mating cluster here; if you watch closely, the female can be seen in the centre of the frenzy from about 20 seconds onwards.