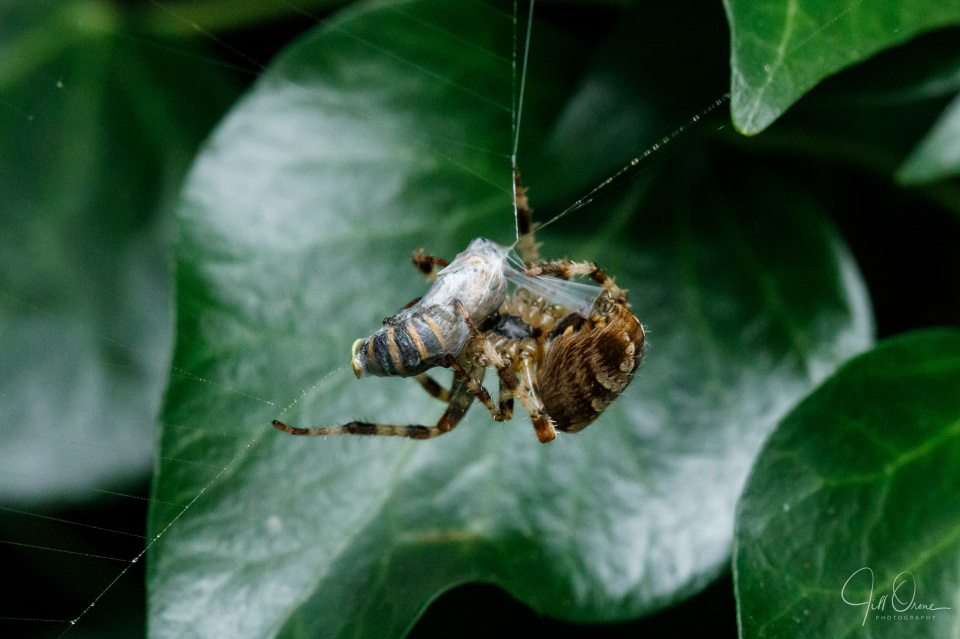 I’ve seen plenty of insect parcels that have been created by garden spiders, but this was the first time I’ve ever watched one being made. It was absolutely fascinating, and I’d have been delighted, but for the fact that the victim was a beautiful fresh ivy bee.

I’d already walked all round the village to see what was feeding on the ivy hedges, the answer being not much because most of the ivy flowers aren’t yet open, but on being chased home by impending rain it suddenly occurred to me to check the ivy that grows along the top of the six-foot fence between our patio and the next-door neighbours’. This is a warm spot, though a dark one, and the flowers are starting to open, so the patch was busy with insects. I was tempted to fetch a step ladder, so as to get to the top of the fence where the light was much better, but R was out and I knew he’d have something to say about it if he came home and discovered that I’d fallen off a ladder in his absence, so I restrained myself and concentrated on taking record shots.

I was happy and excited when I realised that some of the diners were male ivy bees, because I’ve been waiting for these charming creatures to find our ivy ever since I first discovered them in the village four years ago, and I hope that if some females turn up here as well they might decide to stay and nest in the garden. Pleasure turned to distress though, when one of them blundered into the web of a big garden spider. I wanted to intervene, but forced myself not to because the spider has as much right to eat as any other creature, but I hoped against hope that the bee’s desperate struggles might free it.

The spider was quivering at the top of the web, fearful of making her move because I was there, but eventually her prey drive won out and she darted down and despatched the poor bee. She then proceeded to wrap him, producing silk in a kind of sheet, and spinning him around between various of her feet until he was neatly parcelled and secured to the web. It was a very fast process, and I felt that it was a little like watching an industrial stretch wrap operation – apart from the whole spider bum aspect, of course.