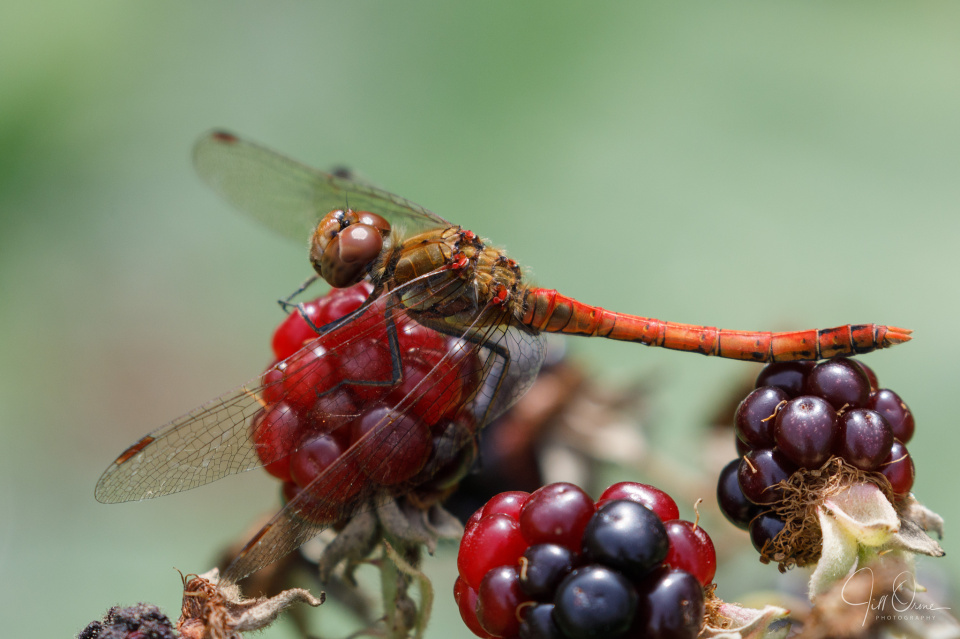 This morning I took both cameras and long and short lenses, and went to stake out the pond I discovered yesterday. I couldn’t believe my luck when this male Common Darter settled on the blackberries – I couldn’t reach him with the macro, so this was taken at full stretch of the long lens, but the advantage was that I didn’t disturb him, and was able to frame multiple images at my leisure. Honesty compels me to say that he was actually scanning the sky for potential rivals here, but I do think it looks as though he was adopting the cobra position as part of his morning workout.

During a happy forty minutes I was also able to photograph one of the two male Southern Hawkers that were patrolling the pond, and – eventually – the female that they were both certain was somewhere in the area. I knew they were right, because I could hear her wings rustling down among the reeds, but she didn’t emerge until they’d gone off to try their luck elsewhere. As she rose out of the reed bed and hovered momentarily in front of me I realised that they’d have been out of luck even if they’d managed to find her, because she was a Migrant Hawker – though that probably wouldn’t have stopped either of them trying it on, should they have caught her. Once she was sure the coast was clear she went back to ovipositing, this time around the more exposed foliage, and I was able to record her working – an exciting moment, because this was only the second time I’ve ever seen a Migrant Hawker in the village, and provided the first evidence that that they’re breeding here. 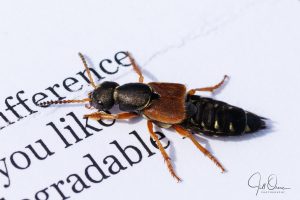 Back at home my luck continued, when a rather stunning rove beetle, which must have hitched a lift from the pond without me noticing, suddenly revealed itself by leaping off my t-shirt and crashing to the kitchen floor. I grabbed the nearest flat but resilient thing – appropriately enough, our Worcestershire Wildlife Trust renewal notification – scooped up the beetle and rushed it outside to the patio table, where I took this photo. Sadly it unpacked its wings and flew away before I had the chance to move it onto a more natural surface, but I’m still pretty pleased with that capture. I’m no beetle expert, but I believe it to be Staphylinus dimidiaticornis, a little-understood species that’s thought to favour open, damp situations (such as pond margins), and is believed to be a predator of other insects. I was surprised to read that these beetles are only about an inch long  – an assertion I could check by reference to the letter, of course, if I cared enough to do it. I would have estimated around twice that, but it was both bold and wriggly, which perhaps allowed it to appear more impressive than if it had been shrinking and shy.