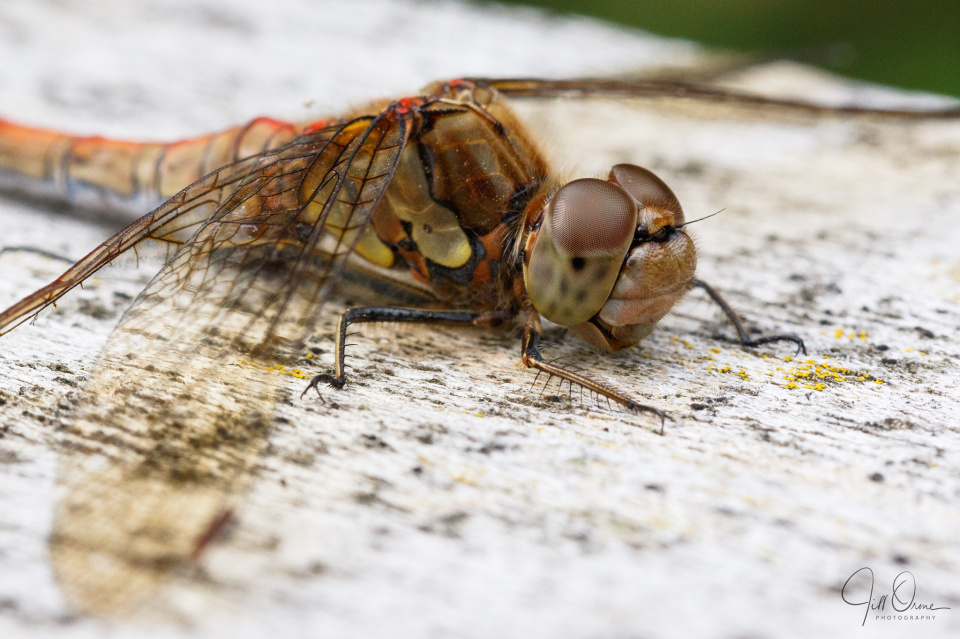 I was walking back towards the house from the wild garden this afternoon, when I saw this old female Common Darter resting on the arm of the garden bench. I don’t have any way of knowing whether it was the same female I saw a few times back in August, but haven’t encountered for nearly a month now, but it seems quite likely because this was her favourite basking spot. In the interim she’s had a bit of a hard time: the image below shows that her right hindwing is so shredded as to be barely there any longer. 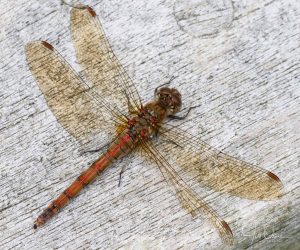 I approached slowly, and she allowed me in to within the minimum focal distance of the macro. Then I thought I should leave her in peace, so I went back to the house, but I was nagged by the feeling this would be the last time I’d ever see her, so I in the end I went back out with a mug of tea and sat quietly on the bench next to her. She didn’t object so long as I kept my movements slow and smooth, and we shared the space peaceably for about twenty minutes. Every now and then she’d demonstrate that she could still fly perfectly well on three and a half wings, by lifting off and neatly catching a fly or a small beetle, then landing back on the bench to eat it.

Suddenly she took off again and flew a couple of quick circuits around me, buzzing my hair twice with her wings, before lifting over the fence and disappearing. I’ve never experienced this before, and it sounds such an unlikely tale that I wish I’d had a witness, but I promise you it’s true. The likeliest explanation is that she was still chasing flies and I happened to have some tiny ones buzzing around me, but I have to confess that in my current end-of-season mood it felt like a valediction.