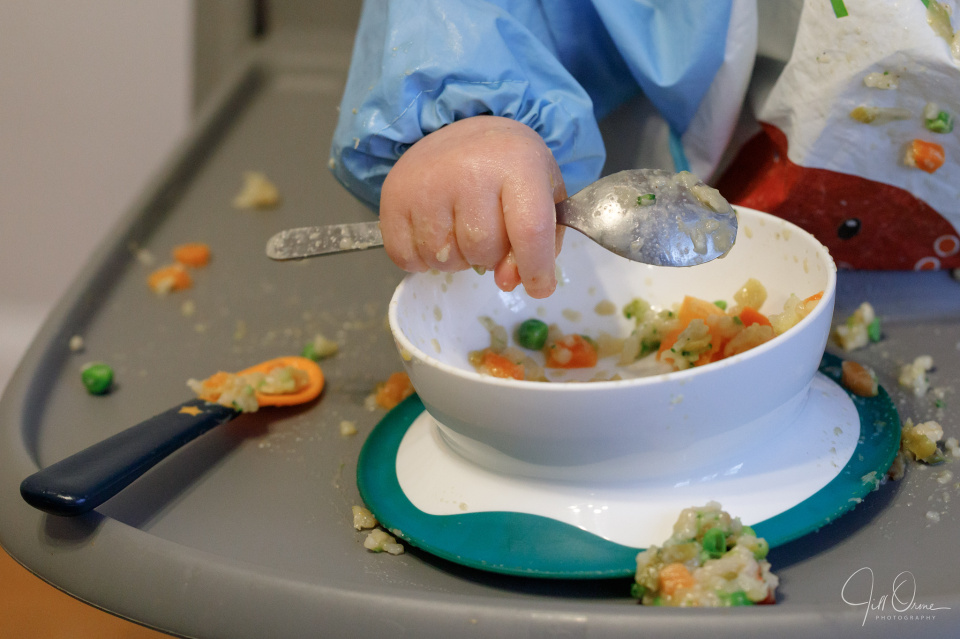 Risotto is currently the very best thing, lunch-wise. Baby B was already on seconds by this point, and most of what you can see here did eventually end up in his mouth – although as he became less hungry it’s true that some of the more egregious vegetables were carefully extracted again and dropped on the floor. Rice is nutritious though, right?

Non-lunch-wise, the very best thing today was R smacking himself on the side of the head, pretending to fall over, and saying “Whoops-a-daisy!” – which started as a thing to stop B crying after he’d accidentally banged his own head, but which caused so much entertainment that it then became a Thing. Repetition being the soul of wit as far as small children are concerned, R got tired of doing it long before B got tired of seeing it done, but when he needed encouragement to continue, B would pat the side of his own head with a little fat hand and beam at Granddad R, who of course then obliged. Over, and over, and over again.

Aside from jokes and tricks, B spent much of the day fitting things together that are supposed to go together, and putting random objects into other things to see how well they fitted or didn’t, which was completely fascinating to watch. One of his birthday presents from R and me – well, me, mainly – was a bag of little wooden blocks with pictures of various invertebrates on them, and sorting these and putting them in and out of the bag took up a whole chunk of time and attention. What I found most interesting was that the 7-spot ladybird block is his clear favourite, and was almost always picked up first, and kept out of the bag till last.