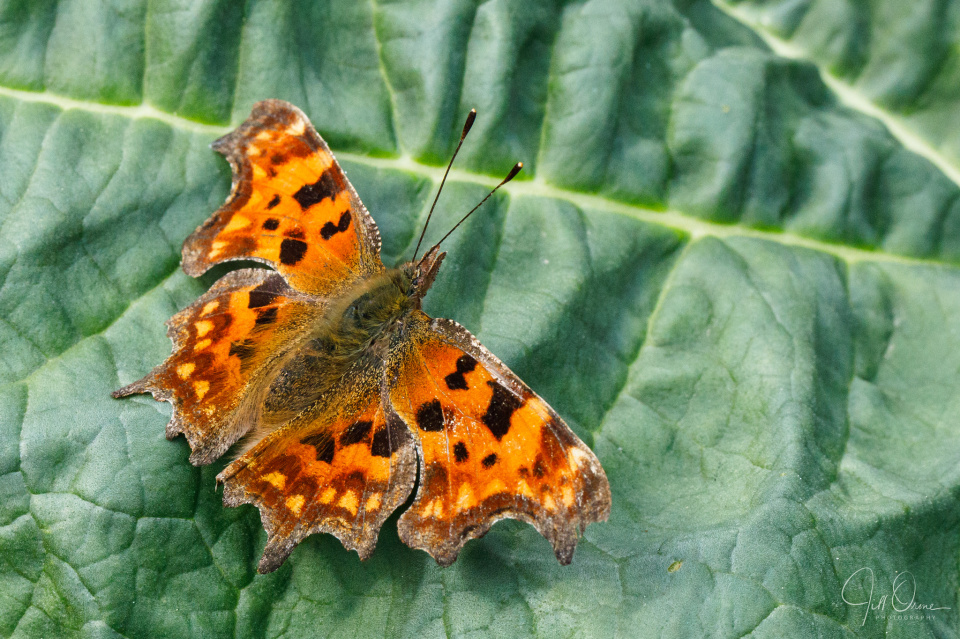 Today was butterfly day in the garden: as well as this Comma, and the Large White I’ve included below, I logged a male Brimstone, a male Orange Tip (first of the season), a Peacock, and four Speckled Woods. The Brimstone and Orange Tip passed through several times, but they were frantically searching for females and didn’t stop for photos, and I accidentally put the Peacock to flight, and didn’t get a shot of that either – though it’s probably the same one I photographed in the secret garden a couple of says ago, so it has already been recorded.

All the other butterflies were skittish too, as they tend to be at this point in the season, plus the Speckled Woods were bickering and barging each other (like they do), so none of them was especially easy to capture on camera. I wasn’t making life any simpler for myself by using a 21mm extension tube on the macro to give me extra magnification – which it did, but it also dramatically reduced the maximum focus distance of the lens, so that everything had to be photographed from close quarters, whether it liked it or not. I’m enjoying playing with super-macro, and getting quite good results, but in future I think I’ll try to have the second camera to hand as well, with a long lens on it for capturing distant record shots of unwilling victims.

As well as butterflies there were numerous other inverts out, enjoying the warm spring sunshine. I found green, hawthorn, hairy, and woundwort shieldbugs, as well as a parent bug and two 14-spot ladybirds. The usual complement of bees and hoverflies were boosted by a hawthorn mining bee (Andrena chrysosceles), and by a dramatically saturnine hoverfly I’d never seen before, which has since been confirmed as a Cheilosia variabilis. Both the local species of bee-fly were out in good numbers, but it was the first time this season I’ve seen female Bombylius major; they were all feeding up today, but the mining bees need to get on with sealing their nests before the bee-flies start looking for host sites to lay their eggs. 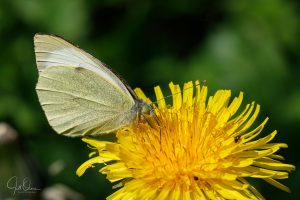 I’m featuring the basking Comma because I like the contrast in colour and texture between the butterfly and the rhubarb leaf. I was also grateful to it for giving me a timely reminder to add some cream to my supermarket order, so that I can make a rhubarb and ginger batter pudding for lunch on Sunday. I’ve added the Large White because he was especially frisky and uncooperative, and getting close to him was a real mission, so even though he’s not sharp stem to stern, I’m still pretty pleased with the image. Fun fact: even if you don’t have a Small White to hand for size comparison purposes, you can still identify a Large White by the extensive black colouration of the front corner of its upper forewing (seen here as a dark shadow through the wing). If you look at the examples of both species shown on the ‘Flying this week’ page of UK Butterflies, I think you’ll see what I mean.