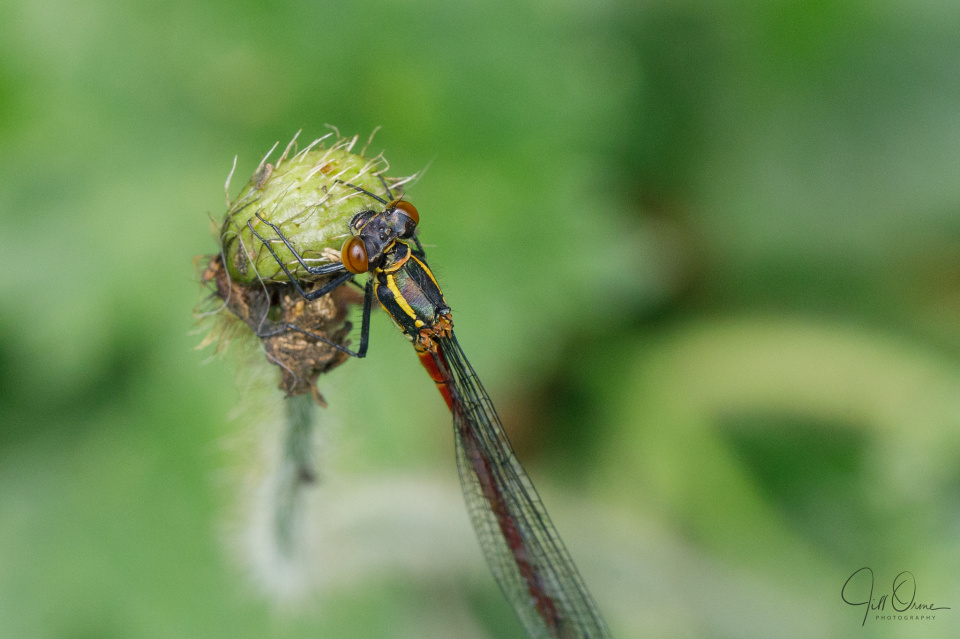 A steady stream of Large Red Damselflies, plus a few Azures and Blue-tails, are still emerging from our patio pond. In the case of the Large Reds this ongoing emergence is now somewhat out of its normal season: this is usually the first species to emerge in spring, and they tend to come out more or less synchronously, so as to maximize their chances of finding a mate when they reach maturity, and completing their life cycles successfully.

The maturation period for Large Reds is around a fortnight (females take slightly more time, and males slightly less), and this is usually spent away from potential breeding sites. As we have a large garden with a lot of trees and shrubs, the newbies have plenty of places they can go to hunt or to hide, depending on their needs, and today I spotted a number of semi-mature specimens in different parts of the garden. I was tidying one of the flower beds when I found this one, which was clinging to one of the seed heads of a poppy that had become swamped by a perennial pea. After lifting the pea and draping it across a shrub I went looking for the poppy to check that it had survived, and realised that I’d inadvertently uncovered a hiding place. I apologised of course, but the damselfly seemed unruffled and stayed put, apparently feeling that he was still well enough camouflaged to be safe.

What I’m not seeing much of at the moment is breeding activity, which is a little surprising given that the emergences have now been happening for several weeks. There were two mature damselflies at the wildlife pond this afternoon, but as they were a Large Red male and an Azure female they were no use to each other, and after flaunting themselves on various leaves for a while they both left, presumably to try their luck elsewhere.