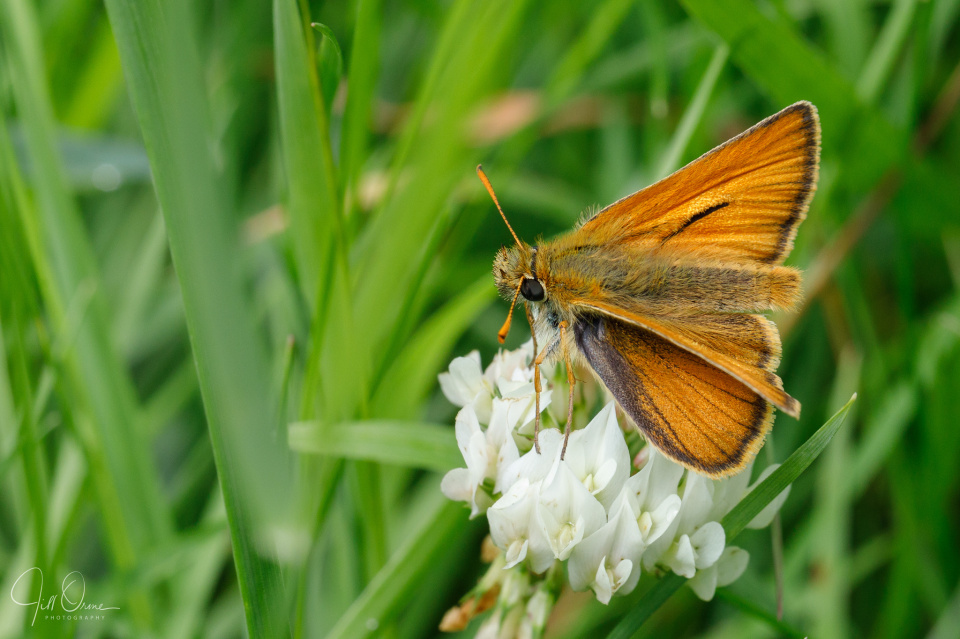 My bug hunts today yielded two especially nice finds, either of which I’d have been very happy to blip. After the usual bout of indecision this evening, I’ve finally decided to post both of them.

This is a pristine male Small Skipper, the first I’ve seen this year. Apart from their relative size, the simplest features that distinguish the Small Skipper from the Large Skipper are that are that its wings are a fairly plain orange colour, without the stained-glass patterning of the LS; and its antennae are less extravagantly curved, with primarily orange rather than black tips. Essex Skippers (which I also find here from time to time) are a very similar size and shape to Smalls, but the tips of their antennae are black, and in the case of the males the sex brand is much more crooked than the one you see here.

I’ve chosen to feature the Small Skipper because this is the more summery of my two images – though that’s something of an optical illusion: it was actually quite dark when I took the photo. A strong gusty wind was whipping the grass around, so the butterfly spent a lot of time clinging to the clover with its wings clamped together, and I spent an equal amount of time waiting for a lull that would allow the grass to settle, my sight-line to clear, and the Skipper to relax and unfold its wings again. We were in full agreement that we’d both had more fun than this, but in the end we completed the shoot successfully, and went our separate ways with relief on both sides. 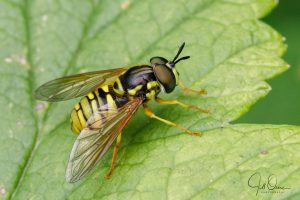 The extra is my favourite photo of the day. I was following a tiny bee around the fruit bed in the garden when a waspy thing flew past and deflected my attention. I realised very quickly that it was a Chrysotoxum hoverfly, which (bitter) experience tells me are nervy and unpredictable, so I was more than happy when I managed to stalk it to rest and capture some close-ups. I don’t see many Chrysotoxum here, but I generally manage a few records each summer, mostly of C. bicinctum and C. cautum. This one though, turned out to be Chrysotoxum verralli, a relatively rare species outside its stronghold of the Home Counties, and one I’ve never photographed before. According to Steven Falk it typically occurs in “tall scrubby grassland or sunny woodland edge with bramble patches”, which doesn’t sound too unlike our garden, so with luck this won’t be the last time I see it.