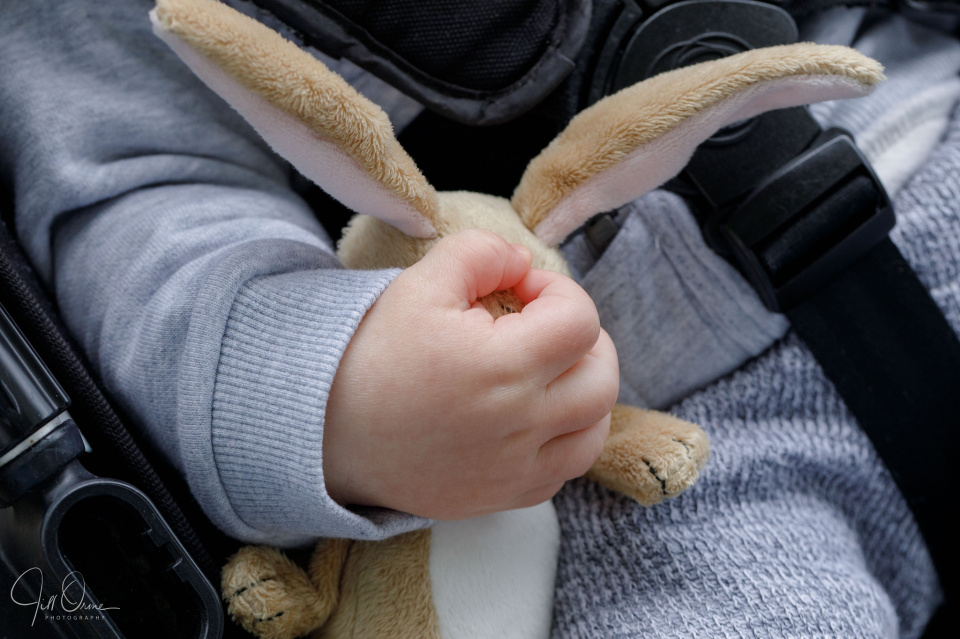 You’d have your feet braced and your ears at an outraged angle too, if Baby B had this kind of grip on your nose.

The Boy seems to be in a transitional phase at the moment, which I put down to him having arrived at the magical 6-month milestone: he’s sleeping more than we’re used to, and while awake he’s very playful and interactive. R and I took him to the park this afternoon, and he stayed awake for the whole trip, mostly looking around intently at the surroundings, but also trying out new baby language and little jokes on us. At one point he appeared to be getting slightly bored, and we realised that we’d forgotten to put a toy in the pram with him – but rummaging around among the blankets and things in the pram carrier I found Rabbit, and the problem was solved. And luckily for Rabbit, he only underwent one flying lesson thanks to the propulsive heft of Baby B’s now quite powerful throwing arm, and we were able to retrieve him, dust him, down, and return him to his owner quite quickly.

It’s fascinating to watch B’s personality developing. He has a keen sense of humour but he’s often quite serious, and R and I agreed today that we find it disconcerting to be gazed at with a slight frown, and to get the feeling that we’ve let him down in some way. This is almost certainly pure projection on our part, but it definitely makes us try harder to be entertaining. B is also now capable of playing favourites, and today this got me the first real cuddle I’ve enjoyed from him in a while, when he deemed me the person who’d responded most appropriately to his tears, after he hurt himself by biting down too hard on a wooden brick. I admit to having felt a tiny bit smug when he rejected other outstretched arms and reached to me, and I need to watch my inbuilt desire to be top of the class, and hold it in check.