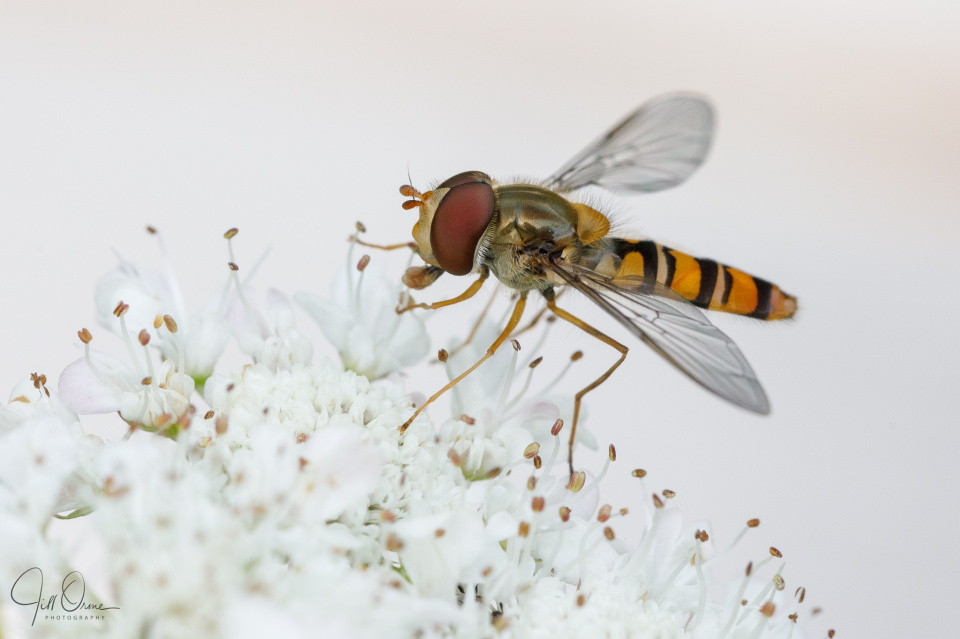 I don’t generally start the day with sugar, but I thought What the heck – it is Sunday, after all, so I had toast and home-made Seville orange marmalade for breakfast. It is, of course, entirely coincidental that when I pottered outside with the camera a little later, the water dropwort in the patio pond was positively heaving with Marmalade Flies, but it seemed too good a coincidence to ignore, so I decided on the spot that that’s what I’d be posting today. I took several dozen shots of different individuals, from different angles, and ended up with quite a few nice photos. This one, though is a bit different to my normal style – and also a bit of a mystery, since this is a very small pond with a lot of plants both in and around it, and no plain backgrounds to be found anywhere. “How did you achieve that?” said R, looking over my shoulder as I was viewing my images. “I have absolutely no idea,” I said, “but I rather like it.” Which is why it gets to be today’s blip.

I was very happy with the generous response to yesterday’s emergent damselfly, so thank you to everyone who commented or gave it an award. Overnight I received an answer to one of the two questions that have been puzzling me – that it, the purpose of the cord-like structures  that are left behind when a dragon or damsel emerges from its final larval case. A man called David Pritchard, who’s a fellow member of the UK Dragonflies and Damselflies group on Facebook, gave this reply to the enquiry I posted there:

“As a nymph, they line the inside of the spiracles to prevent the creature drowning. Once they emerge, they change from using gills to breathing air, so when they shed the skin, the linings stay with it, and oxygen is drawn into the body directly through the holes left behind.”

In case that’s not immediately clear: one of the extraordinary things about a damselfly is that part way through its life it has to change the way it breathes. A larva breathes by sucking water into its body through its rectum and moving it across internal gills – and then expelling it rapidly, which helps to propel the larva through the water. An adult damselfly sucks air into its body through specialised holes along its thorax and abdomen called spiracles. If the spiracles were open during the larval stage the larva would drown, so, according to David Pritchard, they are sealed by a fibrous lining, which is pulled away when the damselfly ecloses, and stay attached to the exuvia.

The more I learn about Odonata, the more weird and wonderful they seem to be. If I’d been tasked with designing a highly effective, predatory, flying invertebrate, it wouldn’t have occurred to me to give it such a unique and complex life cycle – but dragonflies have been around, so they say, for 300 million years, so clearly the system works for them. You can’t argue with evolution.