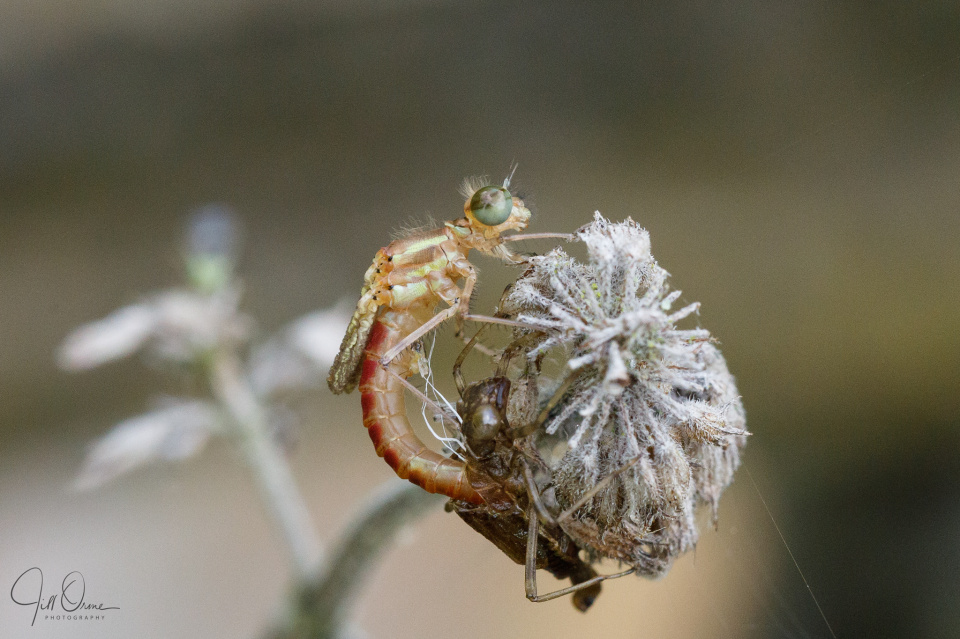 There seems to be a theme developing in our house on a Saturday: there I was, mid-morning, still in my nightshirt (again), doing something unmemorable at my desk (again), when R stuck his head round my study door and said there was an emergence starting at the patio pond, if I was interested. I was indeed interested, so I threw yesterday’s clothes on, grabbed the camera, and scuttled outside.

I’ve posted a little sequence to my Facebook page, if I haven’t already exhausted your interest in damselfly births; this is the frame immediately before he pinged his abdomen fully out of the larval case and it became an abandoned exuvia. Although he’s teneral (that is, tender – the state of an insect immediately after a moult, when its cuticle is still soft and pale), it’s already clear that he’s a Large Red Damselfly. The lumpy bits and pieces at the top of his abdomen give away his sex, which will be confirmed by the shape of the appendages at the distal end once the whole of the abdomen is visible. I haven’t yet managed to find out what the cord-like structures are, or how his larval labium (lower jaw, roughly speaking) transforms into the very different labium of an adult damselfly – but I’ll keep working on those questions, and if I manage to satisfy my curiosity you can be confident that I’ll tell you more about the answers than you ever needed or wanted to know.