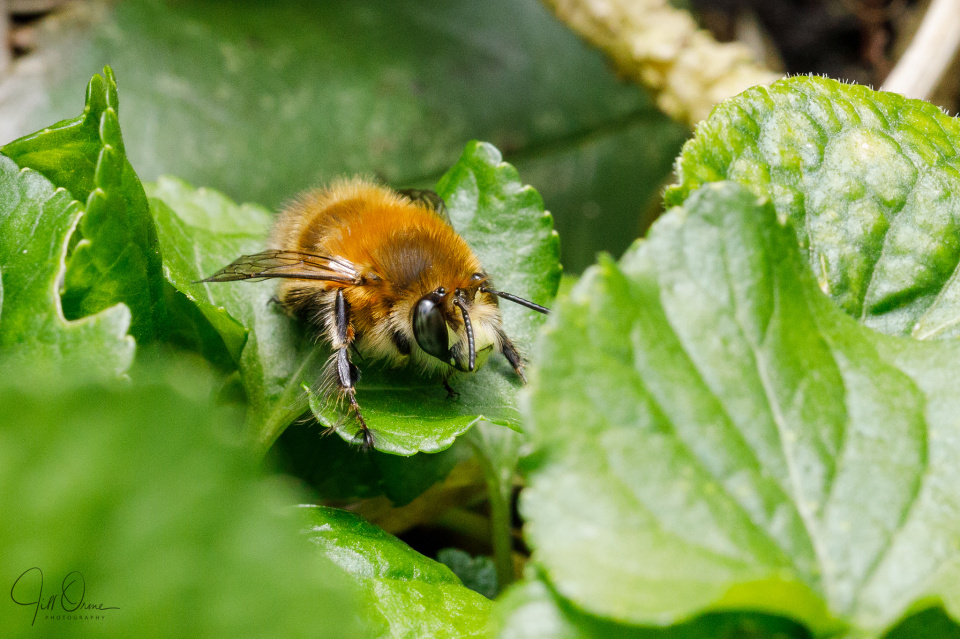 It was a slightly warmer day today, but there was a thin layer of high cloud for much of it, which kept the light hazy. Good for photography, but not so good for getting the inverts flying. Nonetheless, I increased my 2022 lists by a Syrphus torvus hoverfly in the garden, and a white-tailed bumblebee (Bombus lucorum), which I found feasting on some heather in the graveyard of Chipping Campden church when R and I went over there for coffee and a walk. This afternoon I walked the boundary of the parish to see if there was anything hanging about the hedgerows and fields that wasn’t visiting my garden, and though the answer was ‘no’, I did at least push my step count over 10,000 for the day.

This little plumpie came to rest on a sweet violet leaf in the secret garden while I was searching it for bee-flies, and sat quite still while I homed in on him. By the time I took this, I was so close that I’d had to pause to remove the lens hood of the macro so that it didn’t loom over him, but he seemed quite unfazed by my proximity. Having secured my photos I was already pulling back, when he wiped his left antenna with a hairy foreleg to remove something that was bothering him, and then lifted off and went about his business.

Today’s extra is a celebration of the arrival of spring and the rising of sap, courtesy of a couple of 7-spot ladybirds I found on our old farm wall this morning. Because I know you can’t resist a bit of beetle porn. It was at this moment that R appeared and invited me out for coffee, so I didn’t see the rest of the encounter, but I can tell you that Mrs was already off on her travels, entirely ignoring the nonsense that was going on distally, and Mr was at an angle that had him scraping across the ivy on the ends of his wing cases. The ideal scenario from his perspective would have had her running across something edible, which would at least have slowed her down a bit.