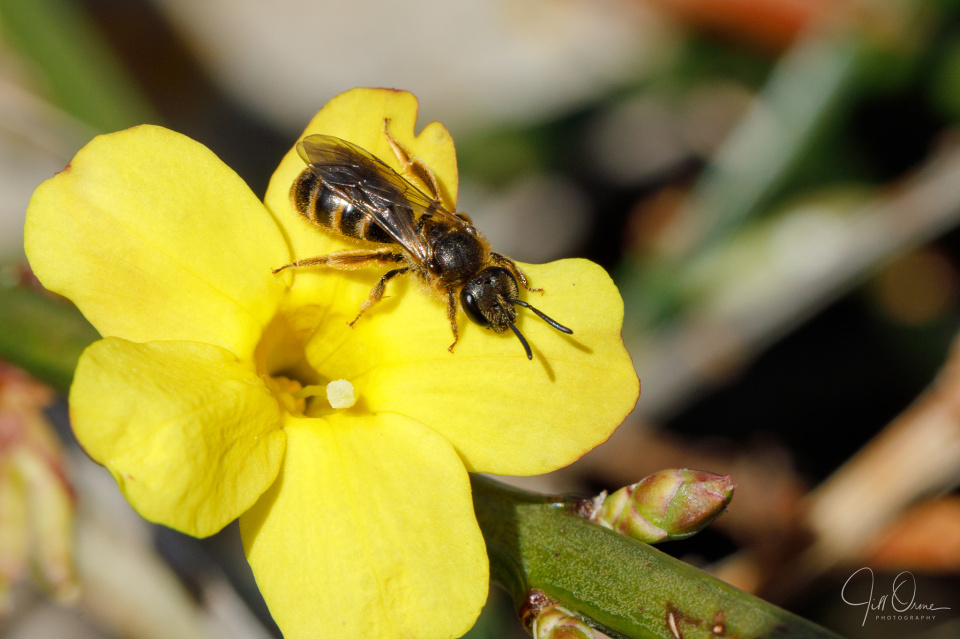 Today brought another couple of solitary bee species to the garden, as well as my first two butterflies of the year, and a single bee-fly. The season is properly under way!

This little beauty, which I spotted on the winter jasmine this morning, is a female Lasioglossum. There are two similar species which are very hard to tell apart, but based on the shape of her face I think she’s Lassioglossum calceatum, the common furrow bee. These are technically solitary bees, but in some places they’re eusocial, which means that they nest in groups, with the founder female acting as a dominant ‘queen’ and the other females serving as her workers. This behaviour is thought to be climate-dependent: in the warmer south of the UK L. calceatum are solitary, but the further north you go the more likely they are to be eusocial. 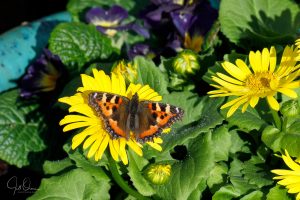 The doronicum I planted on the patio the other day is proving to be an excellent attraction: as well as several honey bees it drew in a smaller Lasioglossum from the ‘morio’ group this morning, and I just managed to capture this Small Tortoiseshell before it was bounced off the plant by an unusually territorial Eristalis tenax. This is one of last summer’s second brood butterflies, which will have overwintered in a whatever shelter it could find – they prefer garages and sheds if they can access them, but otherwise they’ll make do with a log pile or the bottom of a hedgerow – and has now emerged to seek a mate and complete its life cycle. Butterflies that overwinter as adults often reappear looking quite bedraggled, but this one is pretty dapper, so it must have found a good roost.

My other butterfly of the day was a male Brimstone, who was also in pretty good condition, judging by the speed with which he was zipping around in search of a female. “You couldn’t really describe that as fluttering,” said R, as he zoomed past us and disappeared into the distance. I managed a couple of record shots, but they were so poor that no-one other than the County Recorder will ever see them. At least I did get the Brimstone on camera though: when I saw (after much searching) my first bee-fly of the year, I moved in on it too quickly and it dematerialised before I could get it in focus.