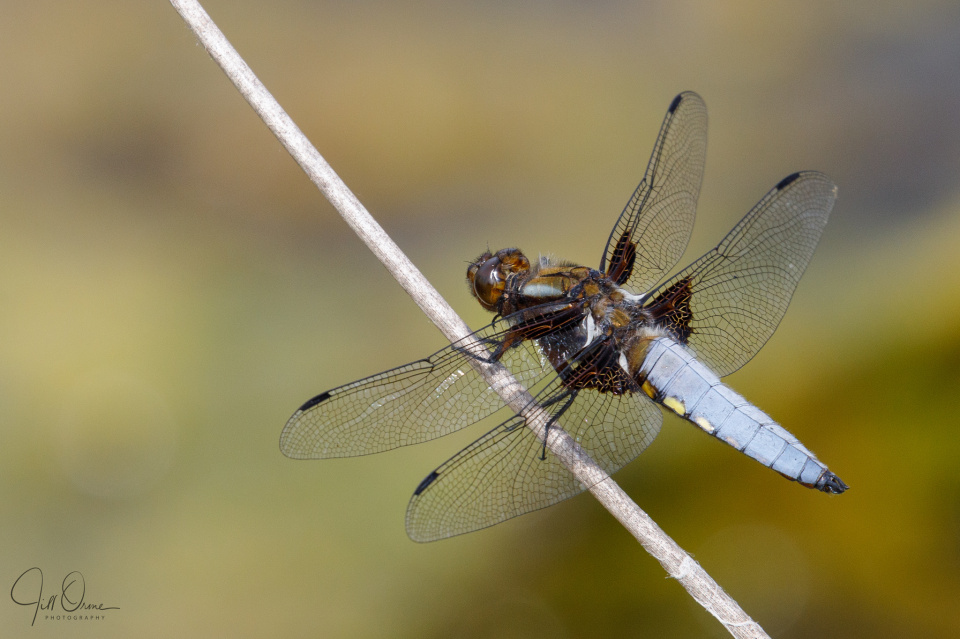 Given the warning signs yesterday, I wasn’t surprised to wake up this morning with a rheumatoid flare. It’s not too bad, luckily, but it’ll probably be a few days before my joints settle down again, and in the meanwhile I’m likely to be pretty grumpy. It put paid to the plan I’d had for the morning, which was to pay my first visit to a local site where a friend took some great invertebrate photos over the weekend – not that the site has especially difficult access or terrain, but when I’m under the weather I try to avoid the potential stress of untried situations.

So instead I spent the afternoon at Grove Hill, playing with the dragons. Today there were at least ten Broad-bodied Chasers around, including some warm and willing females who paid repeated visits to both ponds in order to be chased, caught and mated. I hadn’t had the chance to watch much mating behaviour in this species before, and I was interested to see how different it is from copulation in hawkers, which is quite protracted and frequently violent.

A Broad-bodied Chaser female will present herself at the pond, and the males will give chase until one catches her, at which point the others tend to back off; the mating couple forms a wheel, on the wing, for just a few seconds, then the female drops her abdomen and the male releases her. She then oviposits immediately, sometimes alone, but sometimes with the male flying nearby, to discourage other males from pouncing on her before she’s laid the eggs he fertilised. If she is hassled she might fly away for a minute or so and then come back to finish laying her batch of eggs, and she often disappears into the tree canopy for a short while after ovipositing; then she returns to the pond, and the whole performance kicks off again.

My field guide by Brooks and Cham states that males will aggressively defend a little “territory” where they’ve successfully mated, perching and waiting in the hope that the female will return there, but I can’t say that I saw this behaviour today. For most of the afternoon all the males were on patrol over the whole pond area, and I didn’t have many opportunities for perched shots. Of the ones I took this is my favourite because it’s quite a clean, graphic image, but I’ve posted two others to my Facebook page that I hope you might also find interesting. It’s not at all difficult to tell the difference between male and female Broad-bodied Chasers, because their abdomens are completely different colours, but in some species it’s much harder, and then the dragon people will tell you to look at the anal appendages, which in males are called claspers, because they’re designed for taking hold of the back of the female’s occiput. In my Facebook photos the dragon is opening and closing his appendages, and you can see that they work like a set of pincers.

Brooks and Cham also say that male Broad-bodied Chasers sometimes fail to spot the difference between females of their own species and Four-spotted Chasers (which have similar colouring) – and I can confirm from one attempted mating I saw today that this is true. Both parties were willing, and gave it their best shot, but I fear the romance was doomed from the outset.