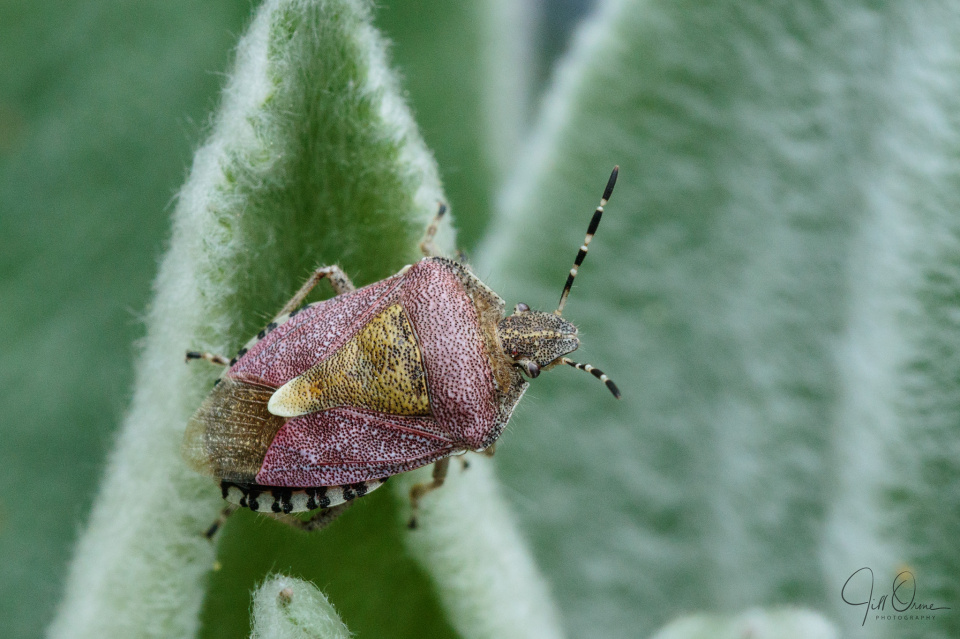 I was feeling pretty mouldy for much of today, though I don’t think there’s anything wrong with me beyond the cumulative effects of several weeks of poor sleep, stress, and boredom. Nonetheless, I struggled to do anything much other than wandering round the garden with the camera. Oh – and complaining. I think I managed quite a bit of that too.

Stepping around that, this is one of the stachys plants I put in the front garden last year, inspired by an exciting encounter at Hidcote. They’ve proved to be one of the rare plants that likes our horrible soil, and are already forming nice big clumps of fuzzy leaves – and if they don’t ever achieve more than that, I’ll still feel that they were worth buying. It would be even nicer if they flowered though, and today I thought that they might be getting ready to do so when I saw a dark blob in the depths of one of the plants.

Not having my glasses on at the time, I had to bend double and use the macro to find out exactly what was occurring, and was contrite when I discovered myself lens to nose with a horrified sloe bug. Rather than retreat further into the plant, as I would have done in its shoes, it decided to leave – though it may have changed its mind after I took my photos, because I then went away and left it in peace. If its larvae eat my stachys, Words will be Had.

R and I Zoomed with H, L and G this afternoon. All are well and busy, though I don’t think I’m the only member of the family who’s a little stir-crazy by now.