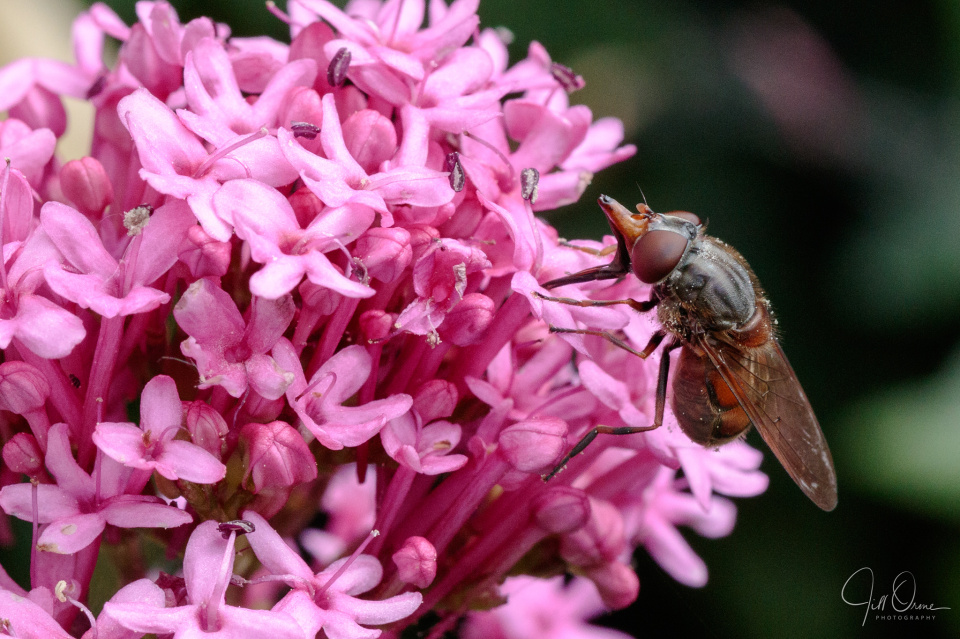 I was pleased to see this little hoverfly this morning, because it’s a favourite species of mine. It’s one of only two that has this long snout, or rostrum, protecting its proboscis; it always reminds me of a Venetian Carnival plague doctor mask. Because of the shape of its mouthparts, Rhingia campestris specialises in eating from tubular flowers such as this red valerian, and some people like to call it the Henieken hoverfly, because it reaches the parts other hoverflies can’t reach. Arf, arf.

This specimen is a female, and although both sexes of R. campestris are dumpy, she’s fat enough to make me think that she’s gravid with eggs. Most sources say that she’ll lay them in fresh cow dung, but this isn’t a cattle farming area and yet the species appears here regularly each spring, so I think they must use other larval habitats too.

This image would benefit from being viewed full-screen, if you have the time. I’ve also posted a second photo of R. campestris grooming to my Facebook page, if you’d care to see it.

Surprise of the day: while I was processing the day’s photos I was idly listening to Simon Mayo and Mark Kermode wittering about films in their weekly podcast, and SM read out a comment I’d made on the pod’s Twitter feed a few days ago. I write any number of things on Twitter, and it was a strange new experience to hear one of them come back out of the speakers at me like that. One of the things I wrote made them both squeak in protest, but I stand by it: I loved 1917, but I still think the baby scene was unnecessary and unconvincing.