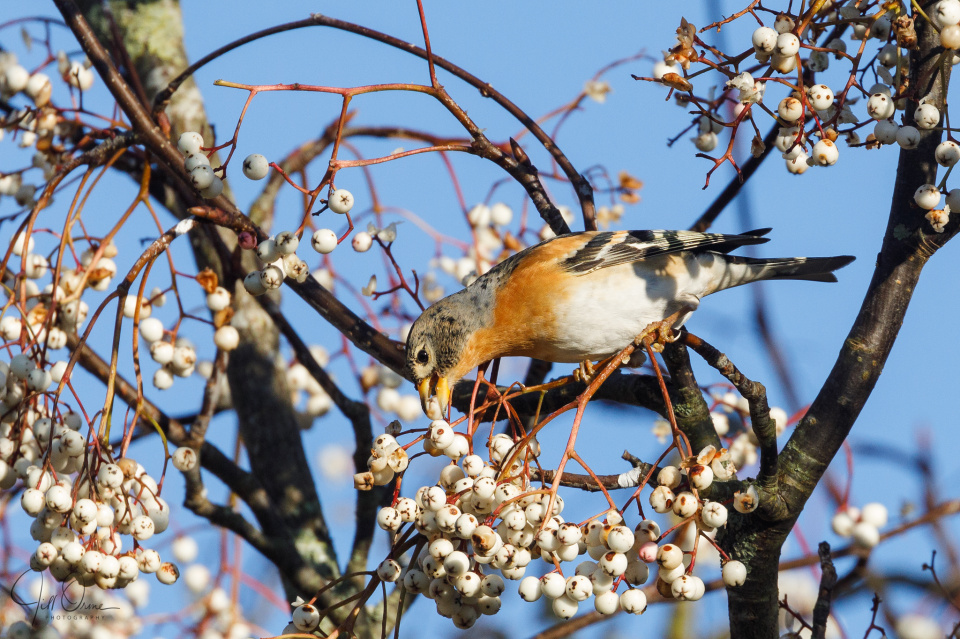 After wasting the morning on a wholly unproductive trip to Kemerton Lake – the surface of the lake being almost entirely frozen over, despite the fact that it was several degrees warmer today than it had been at the end of last week, while the paths were an utter mudbath – I was not in the best of moods by lunch time. I came home, changed my filthy clothes, had a good old moan at R about the general unfairness of everything, regrouped, and set off out again, with the intention of going to Stratford and diving head first into the largest piece of cake I could find.

The day improved almost at once, with a sparrowhawk circling over the village (species number 73 of the year), and a buzzard taking off from a tree near the junction with the Roman road. By the time I got to Bidford I no longer felt the need to mainline cake, so I turned away from Stratford and went up to Hillers instead, to see if the bramblings had managed to eat all the rowan berries yet. As you can see, they hadn’t, though they’re still working on the project quite diligently, assisted at intervals by the mistle thrush I’ve included in today’s Facebook post. It’s interesting that although the mistle thrush is about twice the length and four to five times the weight of the bramblings, the finches were entirely unconcerned about people walking through the garden and stopping to stare at and photograph them, while the thrush would only feed if it thought it was hidden on the far side of the tree to any humans.

The day was further redeemed when a chap I met by the rowan tree told me of a place nearby where I could expect to find good flocks of linnets and yellowhammers. I might even have gone to look for them this afternoon, if his description hadn’t included the words “very muddy”, but having been up to the fetlocks in mud several times already today, I decided to stay clean and save the linnets and yellowhammers for another day.