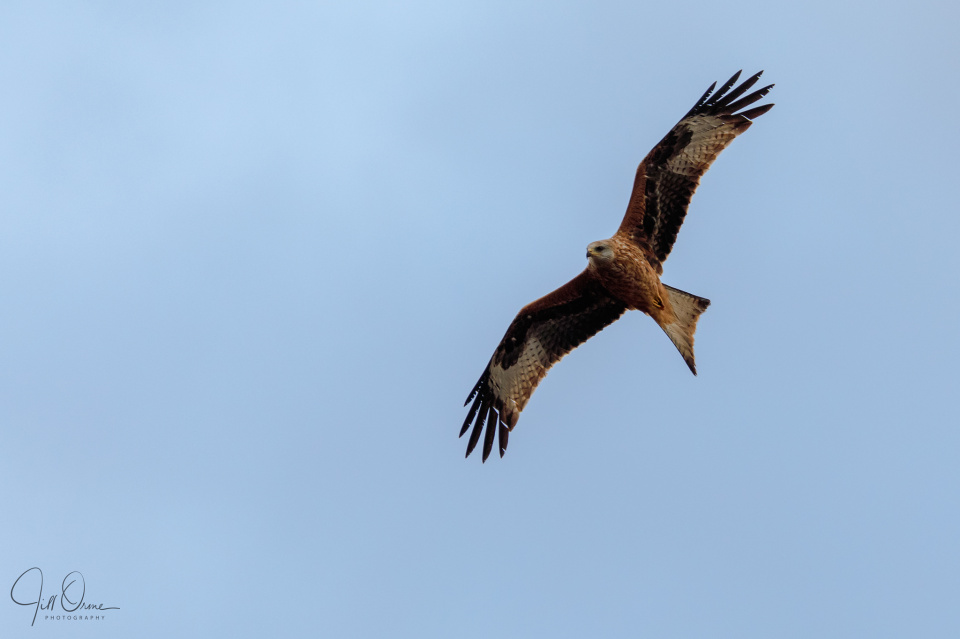 By the time I reached the high Cotswolds this afternoon I had a Bad Feeling: the light was vile, and the wind was howling across the soft top of the MX-5. So when I spotted a red kite hunting over the adjacent field as I turned off the main road, I quickly pulled in, grabbed the camera, and rattled off some shots. None of them is going to win me any awards, though in my defence I was shooting towards what little light there was, which doesn’t make life easy for the autofocus; but I’ve kept half a dozen of the most interesting  ones.

The first thing I noticed about this image is how ratty the primary flight feathers are looking. The damage could have been caused in a number of ways: I’ve seen a suggestion in a birding forum that a kite with the kind of wing damage this one is showing on its left side might have taken a peppering from a shotgun, but this species also has a reputation for flying quite carelessly into branches, barbed wire, etc., and ripping its feathers that way. Adult red kites moult annually, from spring through into summer, which means that those feathers are going to have to keep supporting this bird for several months yet. The moulting process takes so long because the feathers are replaced successively – obviously they can’t afford to be without all their flight feathers at one time, or they’d starve.

The other thing I like about this photo is the way the bird is twisting: the head, wings and tail are all angled in different directions. The red kite is a very agile bird, partly through its use of that long tail as a rudder, and partly because it’s largely made up of feathers: despite its apparent size, an adult only weighs between 800 and 1300g, which is about the same as a pheasant, or a smallish chicken.

Please do look at this full-screen, if you have the time.