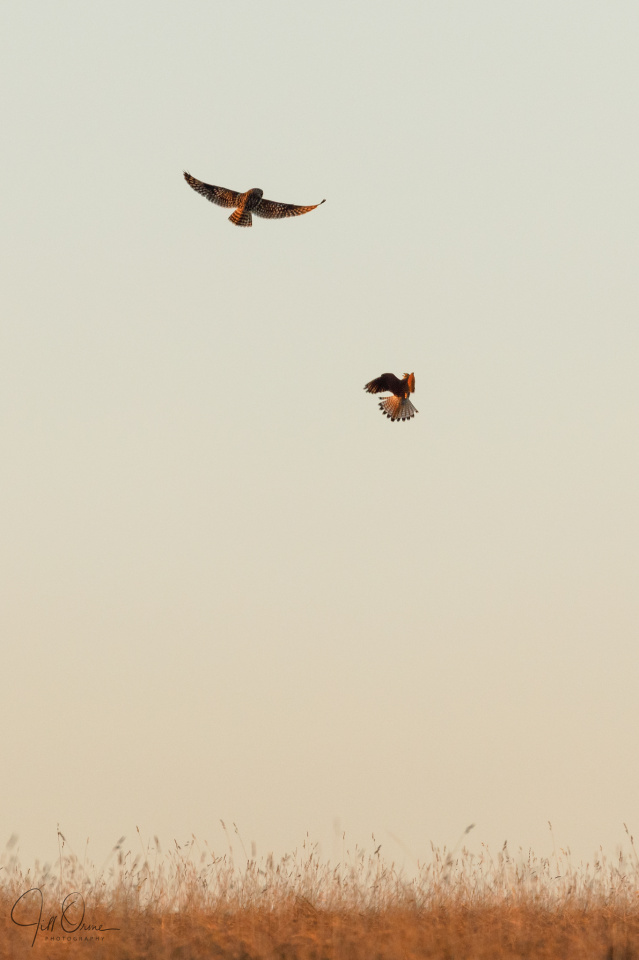 It was another long afternoon of nothing much happening up in the Cotswolds, suddenly but briefly enlivened by a confrontation between a short-eared owl and a kestrel. The owl had just gone up to hunt when the kestrel bombed over from the opposite side of the road and more or less shoulder-charged it – which was probably quite a surprise for the owl, and led to the brandishing of talons and the exchange of insults. I’d guess that the kestrel was hoping that the owl had prey, and could be startled into dropping it, but so far as I could see that wasn’t the case, and after a few seconds the parties separated, few off in opposite directions, and disappeared. I was a long way away and my photos aren’t great, but I think this one conveys a sense of the conflict.

The owls at the field ought to have been stocking up with food today, in my opinion: the wind has swung round from its usual direction and is now coming from the north-east, and as well as being pretty brisk is quite likely to bring in another wave of winter visitors from northern Europe. I’m hoping for more owls, a shrike, and maybe some waxwings. The currently resident owls and hen harriers, which are not remotely clubbable, would probably prefer any fresh immigrants (of the carnivorous variety, at any rate) to go somewhere else.