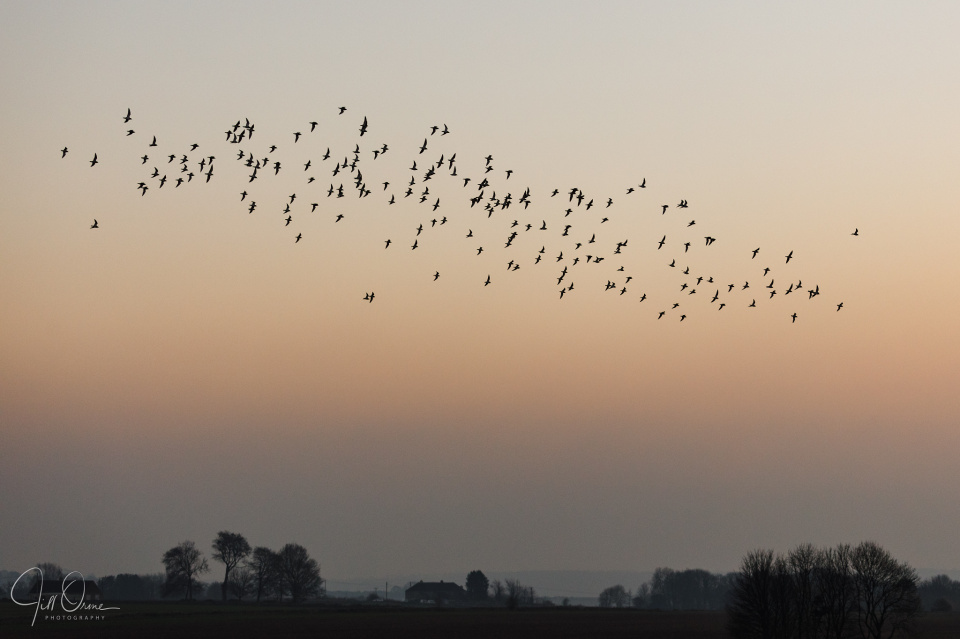 I didn’t feel up to doing much today, but made a late decision to zoom up to the owl field – arriving just before 3.30pm to find the lane so packed with cars that I left mine round the corner, and walked to what I hoped would be the centre of the action. It wasn’t, though unconfirmed rumour had it that I’d just missed seeing an owl chasing off a red kite.

I was pleased to bump into Hillyblips for the first time since her return from South America, and we stood happily exchanging gossip, while the light steadily faded and no further owls interrupted us or troubled our shutter counts. I have almost the exact same pheasant photo that she’s posted this evening, but rather than play Blipsnap I thought I’d go with this congregation of Golden Plover, which spent much of the time I was at the owl field wheeling around the southern sky. I think it works as a kind of companion piece to Thursday’s photo of the starling murmuration, though the plover seem to do formation flying at any hour of the day, and not just as a precursor to roosting for the night.

Golden Plover are very pretty little birds, though I’ve only ever managed fairly distant record shots of them on the ground, and I’ve never seen their summer plumage (spangled black and gold on the back, a dark breast, and a band of white separating the two), because they breed on remote upland moors and the lower slopes of mountains, and I’m far too old and lazy to trek up there after them. But in winter, when their plumage fades to a streaky buff, they come down to lower levels, and with their numbers also boosted considerably by migrants from Europe and Iceland they’re much easier to find. They’re known for forming these quite tight flocks, but will also flock with lapwings. Although often seen in arable fields, they eat insects, grubs and worms, so they’re not actually damaging the crop.