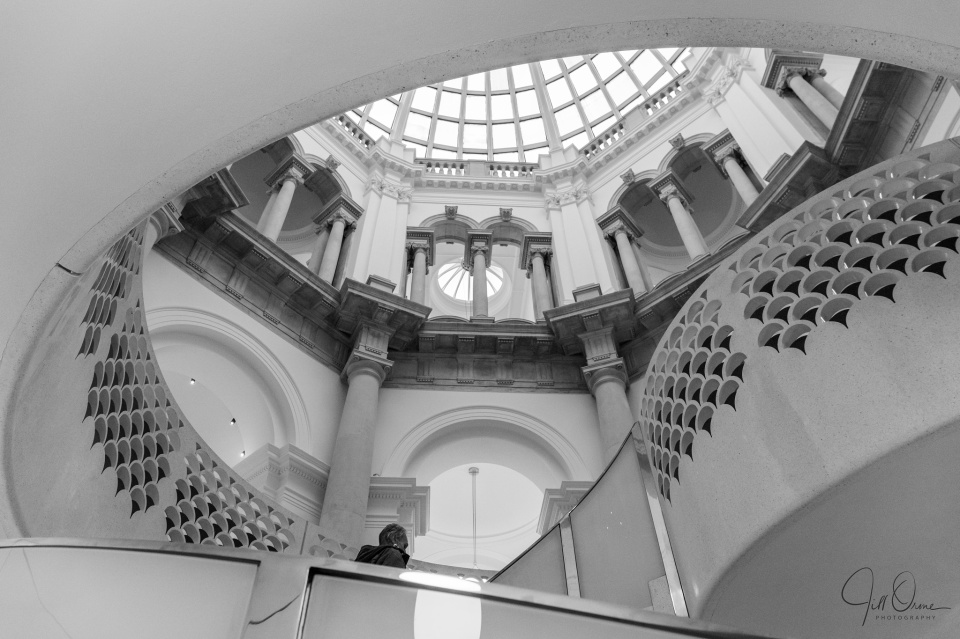 A long and tiring day (especially for R who did seven hours of driving, two of them in stop-start, nose to tail traffic), but highly enjoyable.

After a hellish journey across London (I used to drive around London all the time, but nothing short of desperation would make me do it now), we parked at the Barbican, because that was where we were going to finish up, and then tubed down to Tate Britain to see Edward Burne-Jones – which I highly recommend if either the Pre-Raphaelites or decorative arts more generally are your thing. I also strongly recommend the Tate’s basement café, which is excellent, and this staircase leading up from there to the ground floor. I think I’ve probably blipped it before, but I hope it bears repeat viewing.

After the exhibition we trailed back up to the Barbican, and had the pleasure of being joined at dinner by Child Two, whom we’d managed to entice down from the Frozen North by waving a Punch Brothers concert ticket under his nose. By applying only vague threats of violence and a small amount of blackmail we managed to extract from him a least some information about what he’s up to currently (he seems to have been under the impression that his news would reach us by osmosis if he shared it with his sister – apparently not realising that she didn’t get where she is today by giving her mother unfiltered information); but we weren’t able to answer his return question with much other than “Oh, you know – same old same old, really.” I’m really quite surprised to find how little it pains me that I’ve now become the Offspring’s mother, rather than them being my children!

And then after dinner, Punch Brothers – one of the best gigs I’ve ever been to, in fact probably the only gig I’ve been to that was better than the last time I saw Punch Bothers. I’ve raved about them before, because they make me go all fan-girl (slightly embarrassing in a woman of my age), but honestly, if you don’t know their stuff you should at least check them out. Last night’s gig was part of the 2018 London Jazz Festival, but went way beyond jazz; it’s also part of the band’s sadly short 2018 European tour, but such is the devotion of their fans that if you haven’t already nailed your tickets you’re probably too late to get any. Don’t think I haven’t thought of nipping over to Paris today on the offchance of a return!

I shed a silent tear when they performed Another New World.