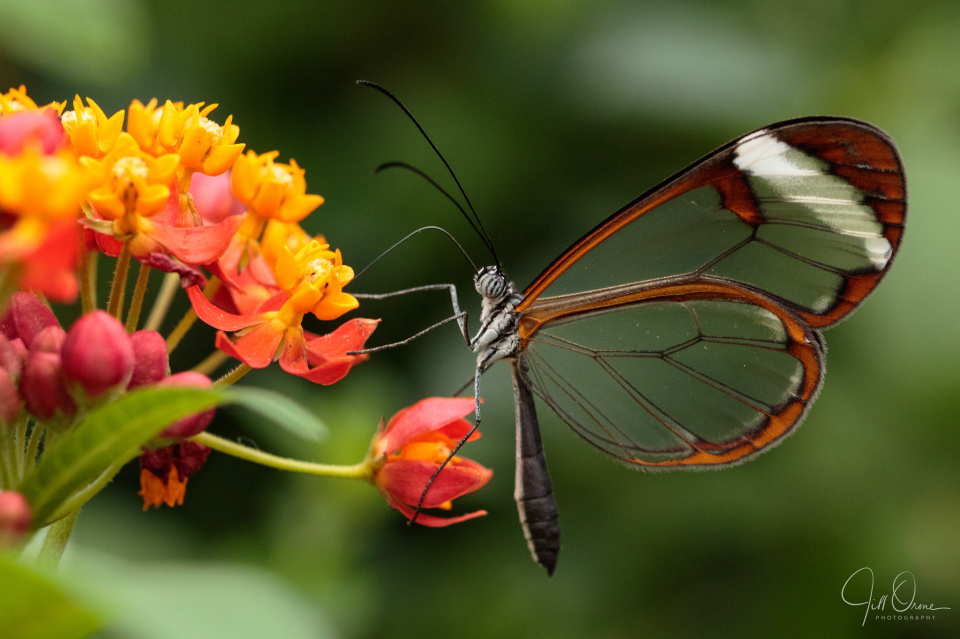 I had an errand to run in Stratford this morning, and decided to combine it with a quick trip to the Butterfly Farm in search of a macro shot for today’s challenge. Not that I need one, given that it’s me who’s judging this month, but you know – politeness.

The last time I posted one of these extraordinary Glasswings, I linked you to some very interesting research that’s being done into the structure of their wings – I won’t repeat it all today, but if you’re interested and didn’t see it last time around, the links are here. If you’ve never seen a Glasswing in flight, I can tell you that they’re pretty difficult to track: I caught the flickering of the white bar on this one’s wings as it went past me, followed it past some dark foliage, but lost it as soon as it went past a brighter, messier background. Eventually I gave up on it, but as I retraced my steps to look for something else I came across it calmly feeding – again, spotting it because of the white wing bar against the dark leaves behind it. Apart from their wings, the thing I like best about these little chaps is the white markings on their bodies and limbs: it always looks to me as though someone has been at them with Tipp-Ex.

My extra today is R’s favourite of my shots; it’s some kind of Postman, and at a guess I’d say probably Heliconius erato, the Red Postman. The vivid colour in the background of this photo isn’t, as you might think, some kind of tropical flower, but is actually someone’s red raincoat. What she was doing wearing a coat in that heat and humidity is an absolute mystery to me – maybe, like both of these butterflies, she’s native to the rain forests of South America. 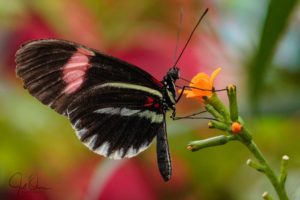