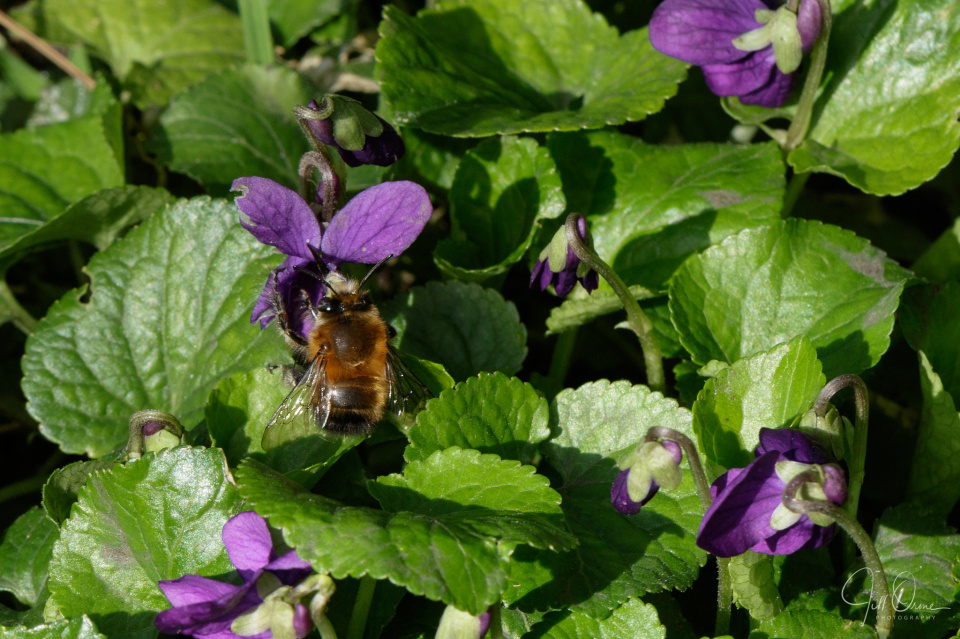 R and I spent almost the whole day in the garden, and though I’m tired now I’m very happy with our achievements. We cut back and tidied the whole of the long front border – possibly the first time this has ever been done so early in the year – and R created a neat edge between the front lawn and the gravel drive. We also cleared out the wildlife pond, with R extracting fallen leaves, and me examining the debris for creatures that needed to be rescued and returned to the water. This fauna consisted mostly of snails, but there were also some Odonata and other larvae, which was encouraging in such a young pond.

When I saw what a lovely day it was I had a strong feeling that today was going to be a Bee Day, and possibly with luck even a Hairy-footed Flower Bee Day, and it turned out that I was right on both counts. The first plumpie that zipped past me made my heart sing, and when I managed to catch a couple of them on camera I was even happier. I have a closer photo than this, of a different individual resting on the lawn (courtesy of R, who spotted it), but I’ve chosen this shot tonight because it was nice to see this little chap feeding from the sweet violets in the secret garden. Unusually, I spent much more time working today than bug hunting, but I’ve posted a little selection of my finds to Facebook, if you’d care to take a look.

Last spring I was expecting to participate in a couple of dragonfly workshops in Somerset, but they were cancelled due to the pandemic. This year, with the roll-out of the vaccination programme and the planned relaxation of restrictions on gatherings, the organiser is hoping and planning to run them, so this morning I diarised a trip away from home and booked a hotel room. This felt like a huge step, and I was sitting at my desk contemplating how strange it was going to feel to be doing normal things again, when I received an email from the administrator of one of the two choirs in which I sing (both of which have been suspended for nearly a year now), announcing that the conductor hopes to get us working again in September. The thing that completely undid me, and had me weeping on R’s shoulder, was the news that we’ll be performing the Mozart Requiem.