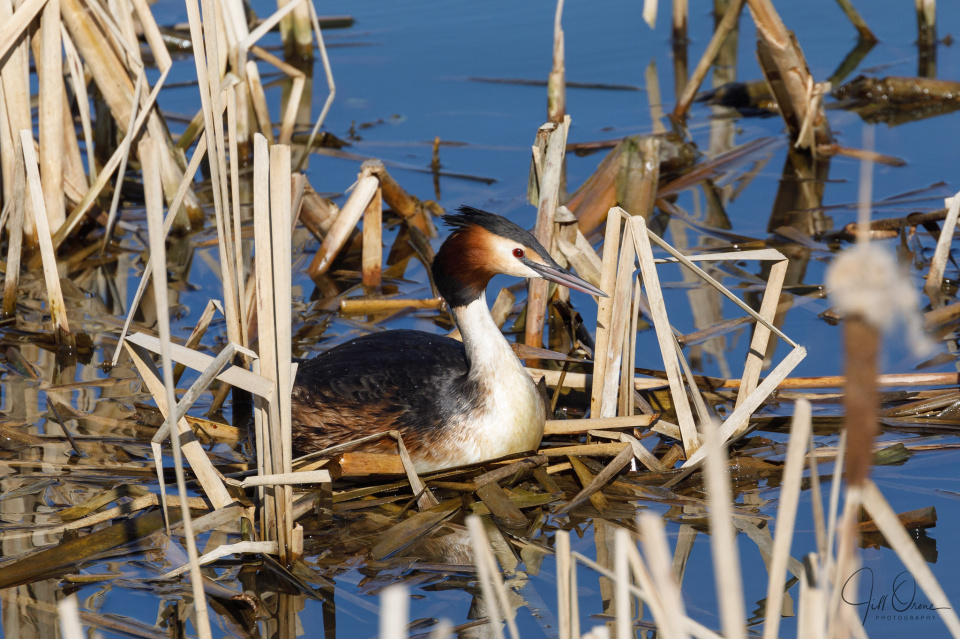 I went to Compton Verney today, for the first time since March last year. The estate has stayed open to members for outside exercise throughout this past winter, but because we live over half an hour’s drive away, R and I haven’t felt that it was appropriate for us to go. My visit today represented a landmark on my own personal roadmap out of lockdown.

It was an absolutely glorious spring day, and the grounds were busy – and not just with people. There were honey and bumble bees buzzing around the snowdrops and crocuses, and I photographed the first mining bee I’ve seen this year (though I haven’t yet had time to confirm its identity). My butterfly year got off to a vivid start when I spotted three freshly-emerged male Brimstones bickering around a viburnum bush in the shrubbery. And I logged both a male reed bunting and a female kingfisher down at the lake, though I was too slow to get a lens on either.

My primary target today though was the great crested grebes, which I knew would be coming into their breeding season. There have been two breeding pairs at Compton Verney for the past few years, one of which nests at the eastern end of the lake, opposite the house, and the other in the western section on the far side of the bridge. This is one of the western birds, which were the pair I photographed on my last visit, but sadly today it was alone. During the three hours I spent on the estate I walked most of the available perimeter of the lake and searched diligently, but though the eastern pair were together in their usual spot, and this one was building a nest platform in almost the same place as the one I saw last March, the fourth bird was nowhere to be seen. 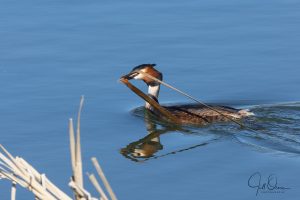 As I processed my images this evening I found them rather poignant. Because the sexes look very similar in this species I can’t tell if this is the male or the female, but usually both birds build the nest, and take turns to pose on it as part of their bonding ritual, so it’s pretty sad to see a lone one going through the motions of fetching and placing reeds, hopping up onto the platform to arrange them, and then settling down as if practising brooding. I spoke to a couple of other photographers on the bridge, but neither knew what might have happened to this bird’s mate. One of them told me that last year the eastern birds lost their nest to a severe storm, and it was the pair at this side of the bridge that bred successfully, which somehow makes this situation all the more sad. 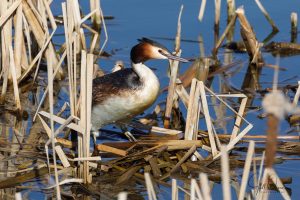