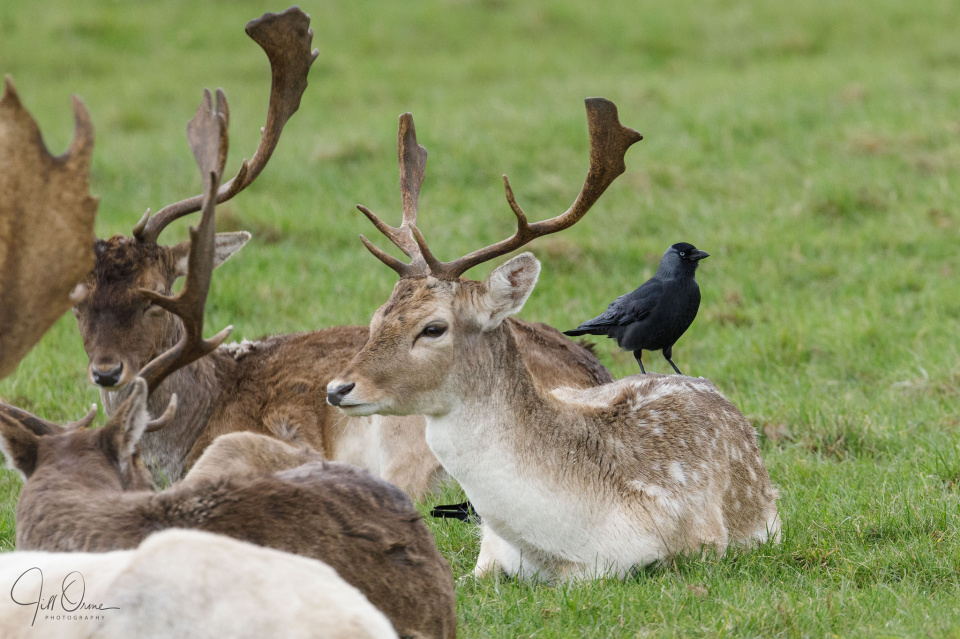 Almost all the park at Charlecote is now open again, which allowed us to have a decent walk this morning and earn ourselves some coffee and cake. It was quite cold though, so it didn’t feel especially spring-like, and because the light was dire I didn’t get many decent photo opportunities. Luckily you only need one, and when R pointed out a small group of jackdaws pottering around among the fallow deer and collecting hair to line their nests, I was happy to stand for a few minutes and wait to see if one would be bold enough to go directly to the source. I did capture this bird plucking some hair from the young buck, but the deer twitched and its head went out of focus, so I’ve gone for this view, in which they’re gazing in opposite directions and both looking rather haughty.

As we drove home the sky cleared, the sun came out, and it turned into a beautiful afternoon. We spent several hours tidying the wild garden, mainly stacking wood and old flagstones, but also moving a large quantity of debris from R’s recent bramble and sapling clearance. There were a good number of hairy-footed flower bees zooming about, and I also found a few other invertebrates, including a green shieldbug and a box bug. Now that it’s warm enough for the over-winterers to emerge, I can start to think about tidying the flower beds and putting the garden on a spring footing.