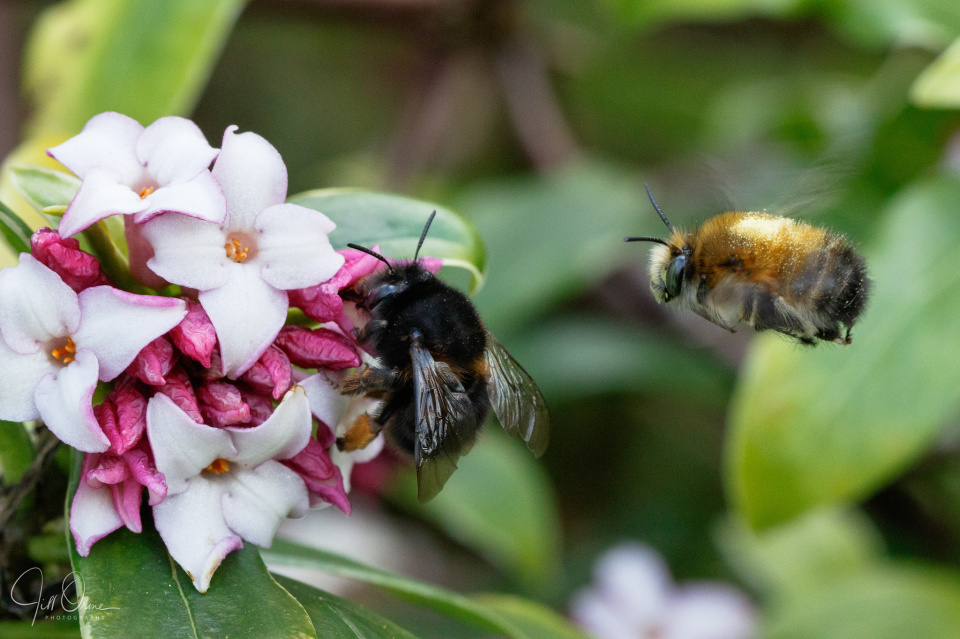 I promised to bring you a photo of a female hairy-footed flower bee as soon as I managed to find one, and here it is. I hadn’t expected to capture a male in the same frame, but sometimes you just get lucky. A bit more light would have allowed a cleaner image, with a higher shutter speed and better freezing of his wing movement, but now I’m just being finicky – I’m actually fairly pleased with this.

Comparing the foraging female with the hovering male will show you what the books mean when they say that Anthophora plumipes shows a high degree of sexual dimorphism. In fact I can’t immediately think of a bee species in which the males and females have more dissimilar colouring, although this pair are at least a similar size and shape, whereas some mining bee females are huge compared with their mates.

I was interested to see that while the female completely ignored her shadow, which is usual, the male merely kept her close company and didn’t try to jump her, which isn’t. Male plumpies are renowned for leaping on every female they see – to an extent that’s known to impede the females in their work of provisioning their nest cells – and I think this is the first time I’ve ever watched a male follow a potential mate for two full minutes without attempting copulation. His behaviour actually looked quite a lot like the guarding strategy that some male dragonflies adopt to try to keep other males away from a female they’ve mated, but I’ve never read anything that suggests this happening in bees.

The only other notable thing about this scene is that the female was merely feeding herself, and wasn’t collecting pollen on the orange pollen brushes on her rear legs, which means that she hasn’t yet chosen a nest site and begun to provision her egg cells. This leads to me to wonder whether it’s possible that she’s not yet receptive to mating, and the male knows it – though that’s just an idle speculation, based on virtually no evidence or knowledge. If there’s a bee expert in the house, I’d welcome an informed opinion!