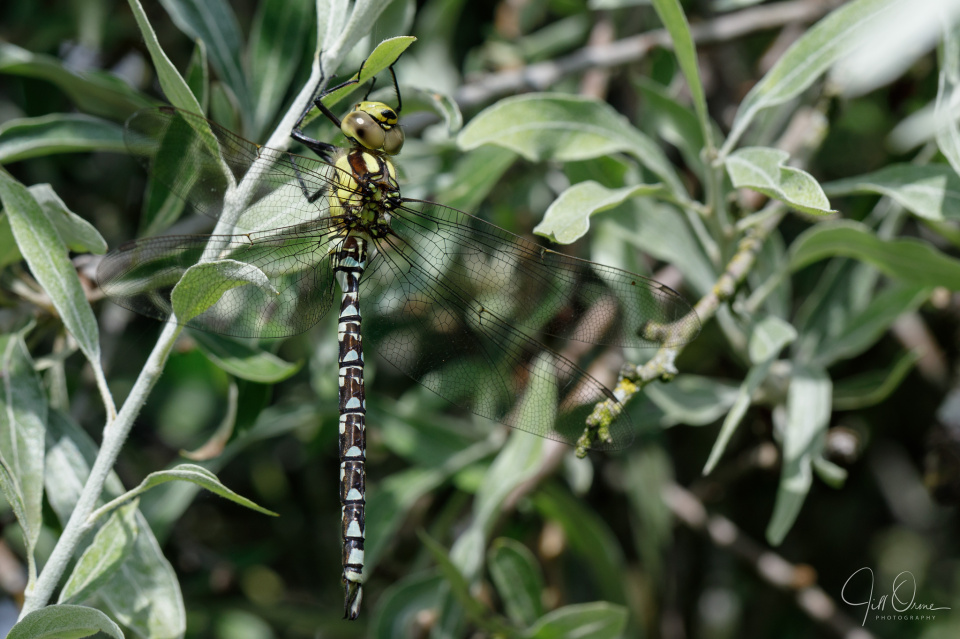 R and I were in the garden, where we’d recently finished pruning back a huge and unruly viburnum. I was sitting on one of the benches, drinking a mug of tea, and he was in the secret garden, beginning to gather up the cuttings, when he suddenly called out, “Dragon!” I approached almost on tiptoe, but in truth I don’t think it would have mattered if I’d turned up with a marching band: the dragonfly was flying lazy hunting circuits, quite low, around R’s head, and took no more notice of me than of him.

Eventually it lifted over the hedge and disappeared, and R and I went back to our work (with me perhaps skipping just a little), but a few minutes later, on my way back from the rubbish pile, I found it circling the top garden. I grabbed the camera and waited, and thus was able to pinpoint the spot where it landed – but for that happy chance, there’s no way I’d have seen it against the pale foliage of the weeping pear tree.

I’d already worked out what it was from its size, colouration, and attitude, but a closer view confirmed it to be an immature male Southern Hawker – so fresh and pristine that I think it may have emerged from a neighbour’s pond last night. Our own ponds are still producing good numbers of damselflies, but Southern Hawkers have a life cycle of at least two years, so although we had SH eggs laid at the wildlife pond last summer, I’m not expecting to see any adults emerging from there until next year at the earliest.

One of the things that fuels my obsession with Odonata is an ongoing sense of wonder that they’re so perfectly designed for the underwater life they live as nymphs, until the day they decide to change elements, at which point they prove to be equally well-adapted to life in the air. The changeover period can be tricky though: this lovely dragon will need to spend the next month hunting and building up his strength if he’s to achieve sexual maturity and breed successfully, and during that time he could easily fall foul of a predator, or an older and stronger rival. But luckily he’s equipped with excellent defensive instincts, and he’s chosen a perch here that perfectly suits his current pale colouring, and hides him while he rests and hardens.