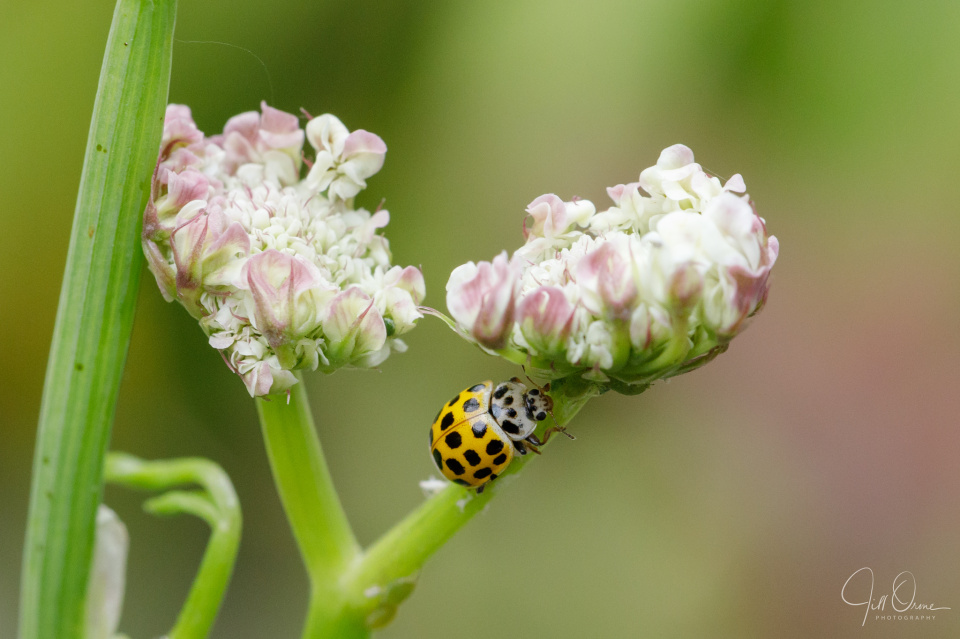 There’s something mildly amusing about a creature that’s less than five millimetres long having an extremely long name, and this tiny ladybird would probably be astonished if it knew that humans have named it Psyllobora vigintiduopunctata. The Germans call it Zweiundzwanzigpunkt-Marienkäfer, and the Dutch name is Citroenlieveheersbeestje, both of which are probably very logical if you speak those languages, but I’ll just stick with the English 22-spot ladybird.

The thing that most of us know about ladybirds – that they’re voracious predators of aphids, and therefore extremely helpful to gardeners – doesn’t apply to the 22-spot ladybird: it eats the filaments and spores of moulds and mildews, especially Erisyphales, which are the fungi that infect plants and cause powdery mildew. It’s not regarded as a useful biological control agent though, because while it’s beetling about looking for powdery mildew it’s as likely to spread the infection as clear it.

The 22-spot ladybird is common throughout England, though less so in Scotland and Wales, but because it spends a lot of its time low down in vegetation, searching for food, it’s not seen as often as the carnivorous species. I find a lot of 7-spot and 14-spot ladybirds in my garden, as well as smaller numbers of cream-spot, 2-spot, 10-spot, and orange ladybirds, but this is the first time in two years that I’ve happened across a 22-spot. If I used a net to sweep for insects I’d probably find many more, but being a lazy person I prefer to let my subjects come to me.

There are two colour forms of this ladybird; one is entirely yellow and black, and the other – like this specimen – has a white pronotum. One web site I looked at states that all the individuals with a white pronotum are males, but I haven’t found any other sources to back up this assertion, and photos I’ve seen of copulating pairs don’t seem to support the claim. The twenty two spots that identify the species all appear on the wing cases, and these don’t tend to vary much in size or arrangement; the five spots on the pronotum, which are more variable, are not counted.