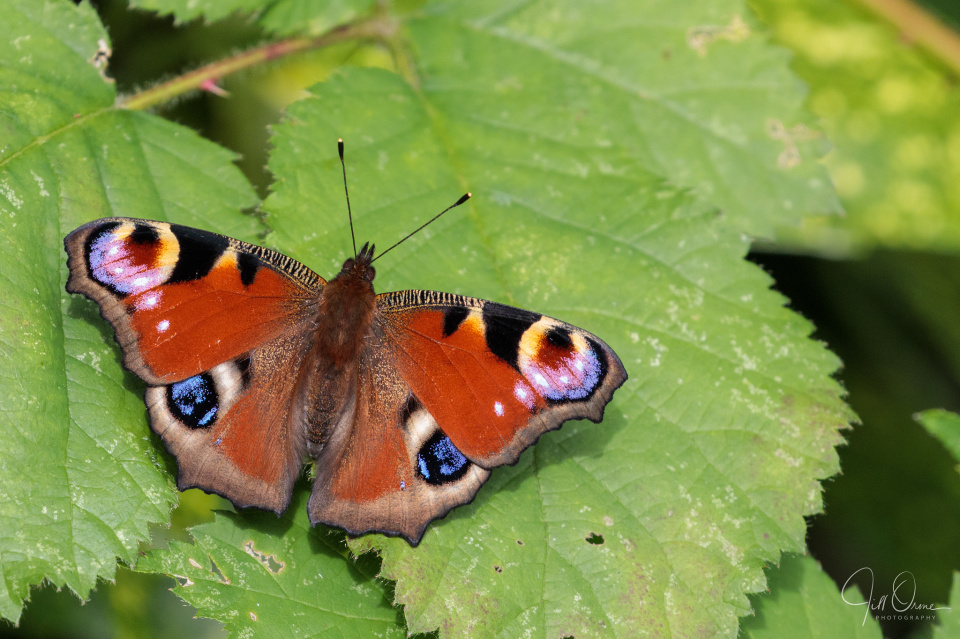 R and I were out in the garden this afternoon, when this very fresh Peacock whizzed past us and landed on a leaf in the rose bed. You’ll note that it’s a bramble leaf, but though this offends me it’s not because there’s bramble growing in my rose bed (a fact of life when your garden was farmland until a few decades ago), but rather the fact that the green doesn’t go with anything in those wings. As I crept towards it with the long lens raised, I silently suggested that it might like to move itself to a more complementary background, but when it took off it disappeared at high speed, and allowed me no more photos.

The next time I saw it was a couple of hours later, at dusk, when I was standing in the far garden watching a Southern Hawker hunting, and the Peacock flounced through in a great flurry of red and black wings, seemingly looking for somewhere to settle for the night. This time I suggested that it might want to draw a little less attention to itself, given that there was a deadly predator on the prowl; and also that it might want to avoid roosting in the weeping ash, where I had reason to think that a second Southern Hawker had already set up camp. Though in truth it’s probably too big for a Southern Hawker to tackle: they will take butterflies, but the biggest I’ve ever seen fall victim to one was a Small White.

I hope that the Peacock does manage to avoid the many predators that could take a fancy to it, because it’s a beautiful creature, and a very exotic-looking addition to the garden fauna. It’s not a common butterfly for these parts – it’s notable event whenever I see one in the village – but there must have been an overwintered female around in the spring, to lay the egg from which this individual has now emerged. With luck it will get to repeat the cycle, feeding up for the next couple of months and then hibernating, and emerging next spring to breed.