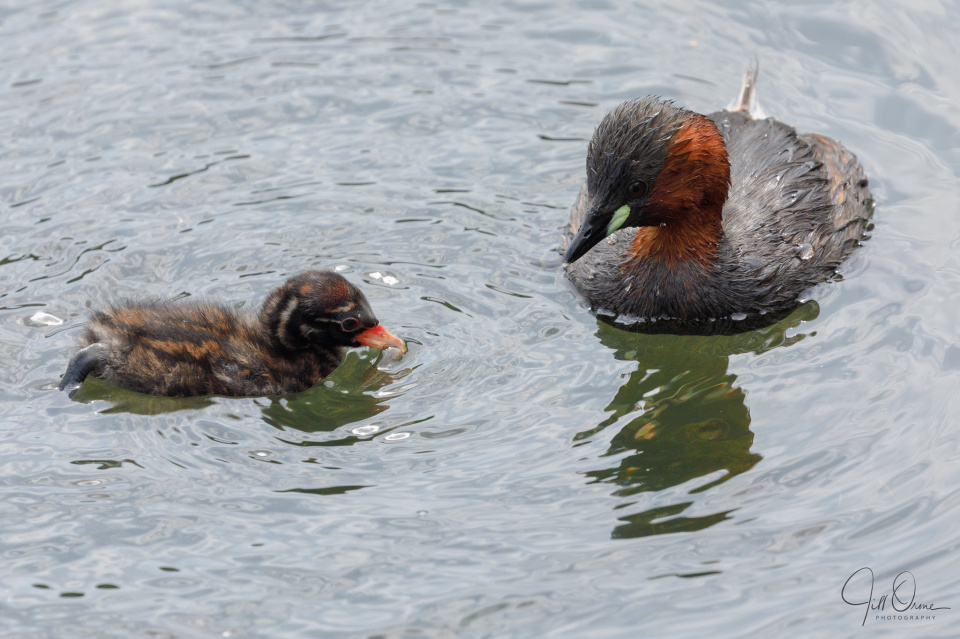 I went looking for beautiful Demoiselles this morning, at the site where I took this photo last year, but all I got was extreme embarrassment and a severely bruised shin, from stepping on a manhole cover that tilted, sending me sprawling across the grass verge with one leg in the drain. I was Not Pleased – but let’s step around that (as I should have done).

As I was close to Kemerton Lake Reserve, I decided to go on there to try to rescue the day, and was rewarded with some nice views of a little grebe, out and about with four chicks. When I first saw them I cursed myself for missing their emergence, it being over a month since my last visit; but a birder who was already at the hide when I got there told me that he only saw them for the first time yesterday, so it seems as though Mama kept them within the reeds until they were quite well-grown. She was probably wise to protect them, because nesting doesn’t seem to have gone all that well at Kemerton this season: the little grebes were in nesting mode from very early summer, but this is the first successful brood I’ve seen. Also, a pair of mute swans appear to be on the point of giving up on a clutch of eggs that they’ve been incubating near the boardwalk for about six weeks, and my hide companion told me that the great crested grebes have now gone through three failed nests. I’ve no idea what the expected failure rate might be for water bird nests, but I’m sure that the very cold and wet weather we had at the beginning of June must have taken a particular toll on them.

But at least this little grebe now has her family, which she was shepherding around the lake, not too far out from the hide and reed bed. They’re already remarkably good divers, considering that they look even more like balls of fluff than their parent, and seem to be able to stay submerged for long periods of time. I doubt that they’re yet effective hunters though, because the adult was diving regularly and feeding them steadily with aquatic larvae and small fish; on one occasion I even thought I saw her pass over a crustacean, though the photo wasn’t clear enough for me to be sure. Whenever she gave prey to one of the chicks she would watch carefully while it ate the catch; here she’s watching while one of them manoeuvres a fish so as to be able to swallow it head-first.

I could happily have posted any one of half a dozen shots of these intrepid and charming little birds, but I’ve chosen this one because I think the light is rather nice and shows the grebes’ colouring well. I’ve put the other five photos on my Facebook page if you’d like to see them.