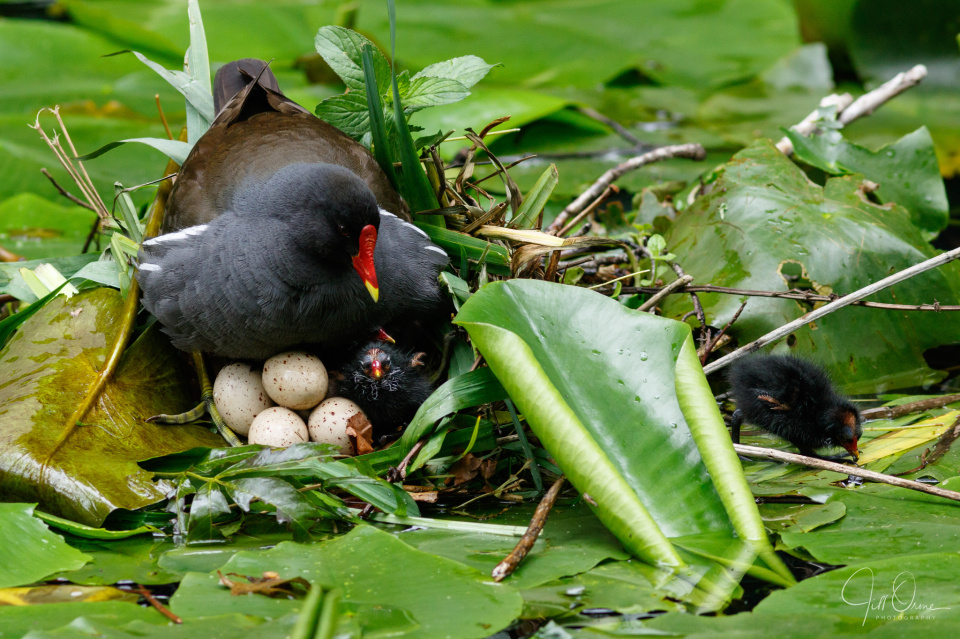 There was drama going on at the Glamorganshire Canal today, where a moorhen nest that enthusiasts have been monitoring for three weeks now has suddenly produced an eruption of four chicks. Sadly though, it looks to be gently collapsing into the canal, with the remaining five eggs sliding repeatedly towards the water and having to be retrieved by the sitting parent. What you can’t see in this photo, because she’d turned it, is that the egg immediately below the centre of the female’s breast was half-hatched, with a chick clearly visible through a small hole in the side. Presumably it was calling, because the mother seemed to be aware of it, and the danger it was in: a minute prior to this, that egg had been on the perilous front edge of the nest, but by now she’d rolled it onto the top of the pile, and by the final shot in my sequence she’d moved it even further back underneath her.

During the latter part of the time we were watching this theatre, the male bird was bringing in extra nesting materials, and adding them to the construction. Having become an amateur nest expert this week after watching a 5-minute piece about the topic on [i]Springwatch[/i], I now know that regular nest refurbishment is carried out by many bird species throughout the brooding period, so the sense I had that he was trying desperately to shore up the structure probably had a lot more to do with my imagination than his intention. I hope so anyway, because if he was trying to save the remaining eggs, he was reinforcing the wrong side of the nest. Whatever the truth of that situation, there definitely seemed to be a race going on against time and gravity, and I found it so stressful that I was relieved when Baby B got bored and decided we were leaving.

My RSPB Handbook of British Birds says this about the breeding habits of moorhens:

“Breeds from March until early autumn. Both parents build the nest among aquatic plants in or near water. It consists of dead reeds and other vegetation. Occasionally it nests in bushes. Both birds incubate the 5-7 eggs for about 21 days. It is not uncommon for two, sometimes three or four, females to lay in one nest. Young are fed by the parents and also by young of earlier broods. By 25 days they can feed themselves, but continue to be fed by their parents until they fly at about 45 days.They become independent between 52 and 99 days. There are two or three broods.”

I generally avoid posting images of bird nests, but there’s no point in being secretive about this one, which is smack in the middle of the canal with a well-used path running alongside it. It’s clear from what we saw today that its progress is being followed avidly by local bird-lovers, and if human goodwill could influence the outcome, all of these eggs would hatch successfully and the chicks would all survive and thrive.