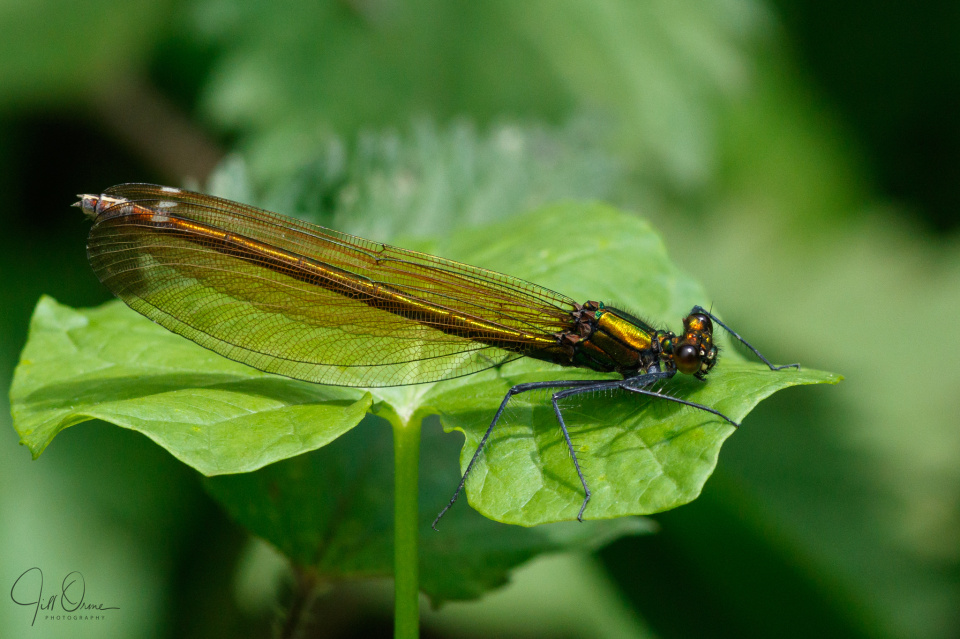 Calopteryx is a Virgo. She likes sunshine, short flights around reed beds, and small flies. She doesn’t like windy, overcast weather, birds, and photographers. She’s looking for love – could you be the Demoiselle she’s searching for??

After an early trip to central Stratford to collect my meds and have bloods taken, I walked the river bank west of Lucy’s Mill in search of Odonata. Sadly, following on from last year’s poor season, Odonata numbers on this stretch of the Avon remain very low, and though some emergence is still going on and there’s yet time for things to improve, I’m starting to get quite a Bad Feeling about the situation. Though I have to say, not as pressingly bad as the feeling I got down by the new marina this morning, when I stepped on what should have been river bank but turned out to be fresh air disguised by a tangle of nettles, and found myself travelling at speed in the direction of the Avon. The good news is that the top half of me landed on the path, and via a lot of undignified wriggling and rolling I eventually managed to return the bit that had been left hanging in mid-air to terra firma. The bad news is that the wriggling and rolling involved a lot of interaction with the nettles, from which none of us emerged unscathed.

I’m beginning to think that I’m getting too old for all these shenanigans.

After restoring myself to some kind of order, I ran a few errands, and then set off homewards, feeling bruised, stung, Odonata-deprived, and generally pretty sorry for myself. On a sudden whim I swung round to the Heart of England Forest at Barton, to see if the day might be redeemed there by an encounter with some Beautiful Demoiselles, and I’m happy to say that it was. Calopteryx virgo is much rarer in these parts than its cousin Calopteryx splendens, the Banded Demoiselle, and I haven’t had many opportunities to observe it, but this afternoon I spent nearly an hour beside the brook that runs down through this piece of land, watching the interactions of a little colony of between twenty and thirty individuals, and came away feeling that I’d got to know the species much better.

If you compare this photo of a female C. virgo with this one of a female C. splendens, after allowing for differences in the shooting angle and the light I think you’ll agree that they’re remarkably similar. Males are easy to distinguish by their wings, which in C. virgo are block-coloured and in C. splendens are striped, but in areas such as the bank of the River Severn where the two species coexist closely, I sometimes struggle to tell the females apart. Generally the Banded Demoiselle is greener, while the Beautiful Demoiselle is more gold or bronze and has darker wings, but there’s some variation within each species, and the colour of any given individual changes as it matures. The white wing spot can be useful, because in the Banded Demoiselle it’s further out towards the end of the wing than in its Beautiful cousin, but this is a false pterostigma – that is, it’s just a mark, rather than being an integral part of the wing structure – and therefore again it’s variable, and in fact, some specimens don’t have it at all. If you were suspicious by nature, you might almost think that the Calopteryx girls were in cahoots, and deliberately messing with your head.