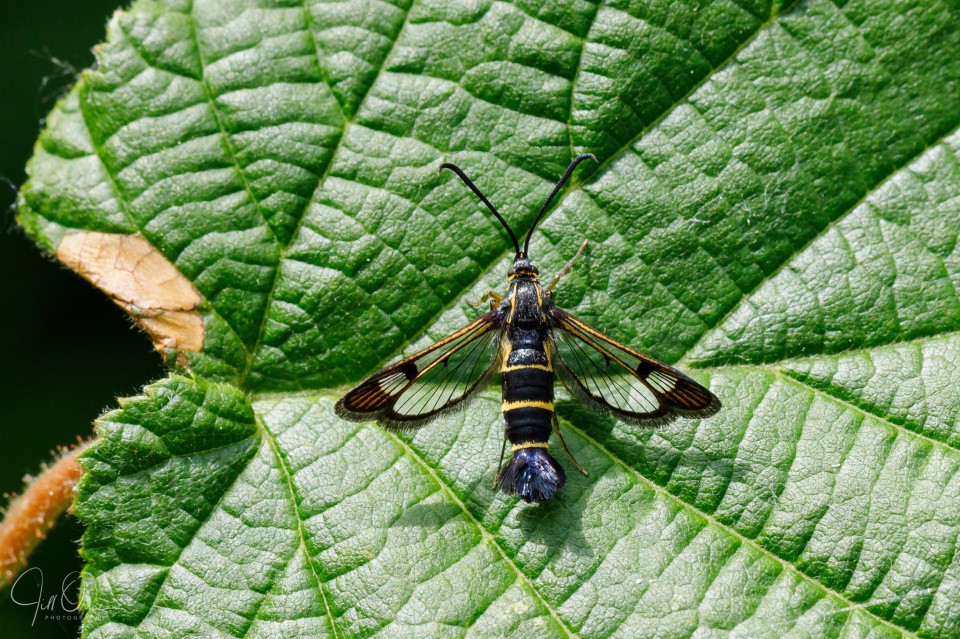 Small things, they say, please small minds. Well, I must have a very small mind indeed, because almost nothing pleases me more than aiming the macro at a tiny creature I’ve never photographed before – especially if I find it in our garden.

Today was intermittently stormy (very stormy indeed in the middle of the afternoon, as anyone could confirm who saw R returning from his run, looking as though he’d just been fished out of the sea), but between the bad bits there were some very warm and sunny intervals. During one of these I was fossicking around the secret garden after hoverflies, when I spotted something lurking on the laurel hedge, just above head height. I’ve only seen a handful of clearwing moths ever in my life before, but once seen, never forgotten, so I knew immediately what it was. It obligingly waited for me to get a hop-up step and clamber up to take its photo before flying away, but it turned out when I uploaded those files that I hadn’t made a very good job of them, so it was lucky that I found it again later – twice, in fact – basking on a self-sown hazel sapling in the middle of the fruit bed. My sighs of relief when I secured better photos were probably audible even over the thunder that rolled across us a short while later.

Anyway, having done my research and checked with the experts, I can tell you that this is a Currant Clearwing, and the fact that it has three abdominal stripes rather than four shows that it’s a female. It’s quite a small moth, with an extended wingspan of around 2cm, but the yellow shoulder stripes and the orange streaks in the outer wing bands are distinctive, and help to separate it from a couple of other, similar species. Adults fly by day between May and July, and often bask close to a larval foodplant; the grubs develop in the shoots of blackcurrant and redcurrant bushes (and less commonly gooseberry), and overwinter there in their larval form.

Conservation status: Scarce, says Butterfly Conservation. These words are music to the ears of invertebrate recorders, of course – I get a little buzz every time a record I enter is auto-flagged as unlikely, because either the location or the time frame haven’t been associated with that species before, and I smirk smugly when that record is later checked by an expert and accepted as correct. It’s citizen science, innit? I’m contributing (microscopically, admittedly) to the sum of human knowledge. But in this case I’m dubious, because I know people who use pheromone lures to attract clearwing moths so that they can record them, and the consensus opinion among them is that these little guys are really far more common and widespread than has been realised up to now. A more accurate conservation status would therefore probably be “Under-reported”.