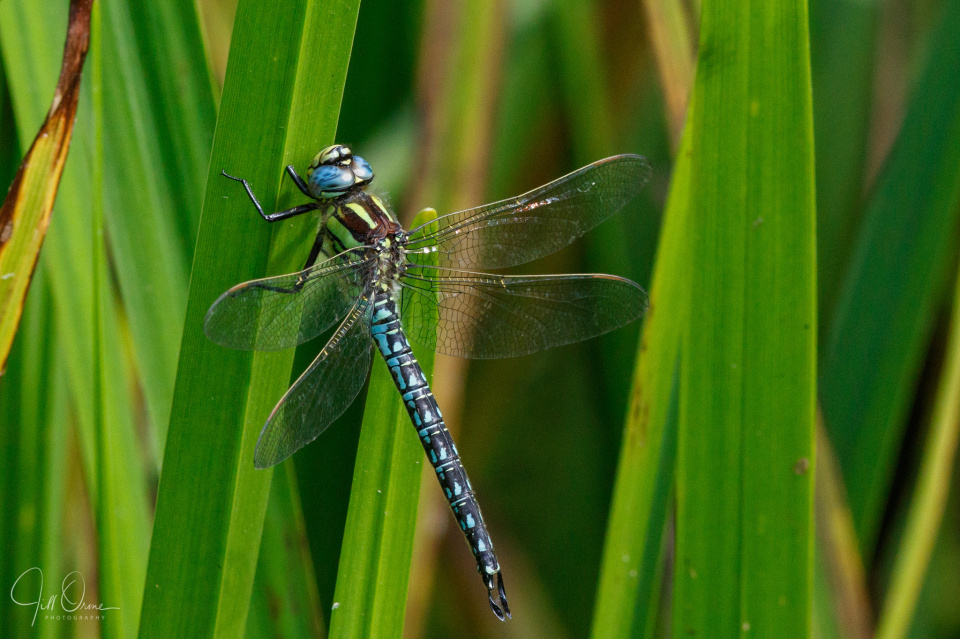 It’s three years since I last managed a photo of a Hairy Dragonfly that wasn’t a blurry distant flight shot, so it was well past time that I managed another. The previous occasion was down in Wiltshire, where I photographed a pair in cop, though I note from the journal entry that I didn’t actually realise what they were until I looked at my photos back at home. Today’s photo was taken at NT Croome, where the Hairy Dragonfly was first recorded during the lockdown spring of 2020. At that point it was only seen right at the opposite end of the long watercourse to this – probably because, with the estate officially closed, that was the only section that could legally be accessed, via a public footpath. Last year I saw a couple of specimens at the lake, as did Hillyblips, but my flight shots weren’t as good as hers, and were only ever shared with the county recorder.

Today there were at least two males patrolling the channel around the larger of the two islands in the lake, but they were active and fast, and surprisingly difficult to pick out: this is the smallest of our hawker dragonflies, and the most subtly coloured, and in flight they’re almost ghost-like. However, I remembered having been told recently by a local expert that they land more frequently towards the end of the afternoon, so I waited around, and eventually I began to see them perching up. They like to perch either very low or very high, and are notorious for either coming down deep in reeds, or suddenly whizzing up into the trees to bask, but eventually patience won out, and this one landed where I could get to him on the near side of the reed bed. I see that he’s missing half of his left foreleg, but I can’t say that this appeared to be discommoding him at all. 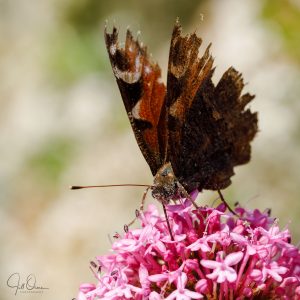 Also in sub-prime condition, the Peacock butterfly in tonight’s extra photo is probably a full year old now, and surely can’t be long for this world, but it was feeding with gusto on the red valerian on our garden wall this morning, and fluttering the tattered remains of its wings threateningly at any other diner who came too close. At this point in the day the front garden was Lepidoptera Central: within a short space of time, as well as the Peacock, I photographed a Brimstone, a Red Admiral and a Burnet Companion on the valerian, a second-brood Speckled Wood feeding (unusually) on the nectar of a deutzia, and a Cinnabar noodling around in the grass. We also acquired our own male Large Skipper, who fed briefly from the valerian, but then (as seems to be their habit) took up a position on a fan of montbretia leaves, and used this perch to keep a watchful eye over his territory. I’d been expecting this arrival after seeing a specimen in the butterfly field yesterday, because for the past few years we’ve had three or four in the garden each summer, and I now think they must actually breed here.

Sadly I didn’t manage to get photographic evidence of the morning’s prize visitor, a Painted Lady which took off like a rocket when I had the bad manners to point a long lens in its direction, and disappeared over the wall into the next-door neighbour’s garden. It’ll be back, I thought. We have red valerian, and she doesn’t. But I was wrong – or at least, if it did come back, it waited until I’d gone off to Croome to do it. While it was annoying not to be able to record it formally, it was still a nice tick on my year list.