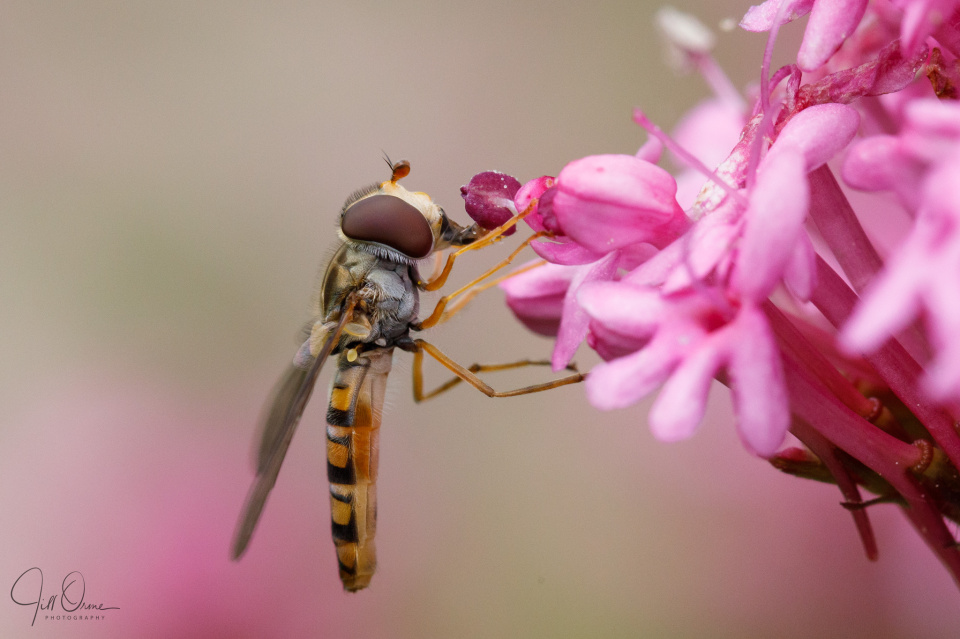 Although it was still very cloudy today, the wind dropped and the temperature rose a little, which brought the inverts out of their shelters, and me out of the house with a camera. I found quite a few nice subjects over the course of a couple of hours wandering first around the garden and then along the field pathways around the village, but the two I’m featuring here are my favourites of the day.

The main image is, of course, a marmalade fly (Episyrphus balteatus), a hoverfly I’ve photographed many times, but which I always find appealing if I can capture one against a clean background. They’re reactive little flies though, especially when they’re fresh, as this female was, and it doesn’t take more than an over-hasty step forward to get them activating the hyperspace drive, so I was happy that she was sufficiently intent on the red valerian to allow me half a dozen photos before she whisked away. E. balteatus is one of the species that will vibrate its wings at rest to keep warm, and that’s the cause of the motion blur you can see here, rather than any specific preparation for lift-off. 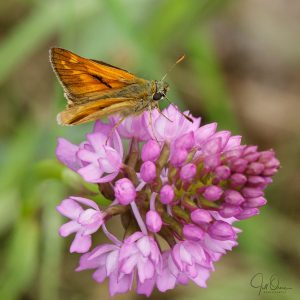 My walk around the village took me through the butterfly field, which has been a consistent disappointment for a couple of years now, since its owner decided to let it become an overgrown wilderness, but which today provided the first Large Skipper of the year. So far, so pleasing, and better yet, he was sitting on a pyramidal orchid. But. The orchid was growing in messy vegetation underneath a hawthorn shrub, with poor access from this side, and none at all from any other angle. The undergrowth was wet too, of course, after all the weekend rain – and by the time I’d knelt in it for ten minutes, so was I. The only really lucky element of the whole encounter was that the butterfly was either too cold, too tired, or too fed up with being the only Large Skipper in the village, to stir himself and fly away. Having gone to so much trouble to take it, the shot I’ve added in the extras almost earned itself top spot, but as an image I prefer the hoverfly.

There are half a dozen other photos from today on my Facebook page, if you’d care to see them.