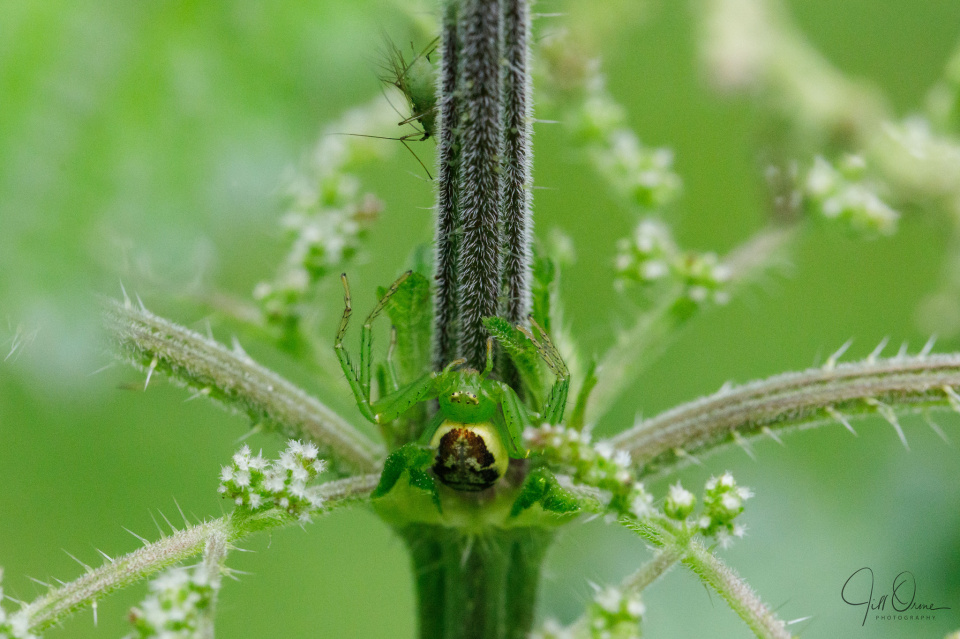 Today felt more like October than June, and I spent much of the morning at my desk, grumpily processing old photo files while keeping one eye on the weather outside my study window. By noon it was at least not raining, though you could hardly have described it as dry, but I decided that this was about as good as the light was likely to get, and squelched off down the garden with the macro. Although my expectations were low, in the end I did make a few quite nice finds, and though this isn’t the best photo of the day technically, I’ve chosen it tonight because I don’t believe I’ve ever posted a green crab spider before.

We don’t have very many crab spiders in this country, and Diaea dorsata is the only representative here of its genus. It’s widespread across southern England, becoming progressively rarer the further north and west you travel, and is usually found in woodland, especially among the leaves of yew and box trees, but also on oaks. This female, who as you can see had abandoned the trees in the wild garden in favour of lurking on a nettle (a choice she may have regretted when she realised that I’d seen past her camouflage and was stalking her) is about 5mm long, which makes her about half the length of a fully grown female Misumena vatia. Males are smaller still, reaching around 4mm in length. Adults of both sexes can be found in May and June, with females persisting into the autumn. Juveniles overwinter under the loose bark of dead trees.

The aphid on the other side of the nettle stem stayed in exactly this position throughout the couple of minutes I was pursuing and photographing the crab spider, which was odd, because she was whisking up and down and around the stem in an attempt to get away from me, and I was scuttling around the plant after her. It didn’t look as though it had already been attacked, but I didn’t much fancy its life chances once I walked away and stopped distracting this potential predator. It’s possible to be too phlegmatic, I think.