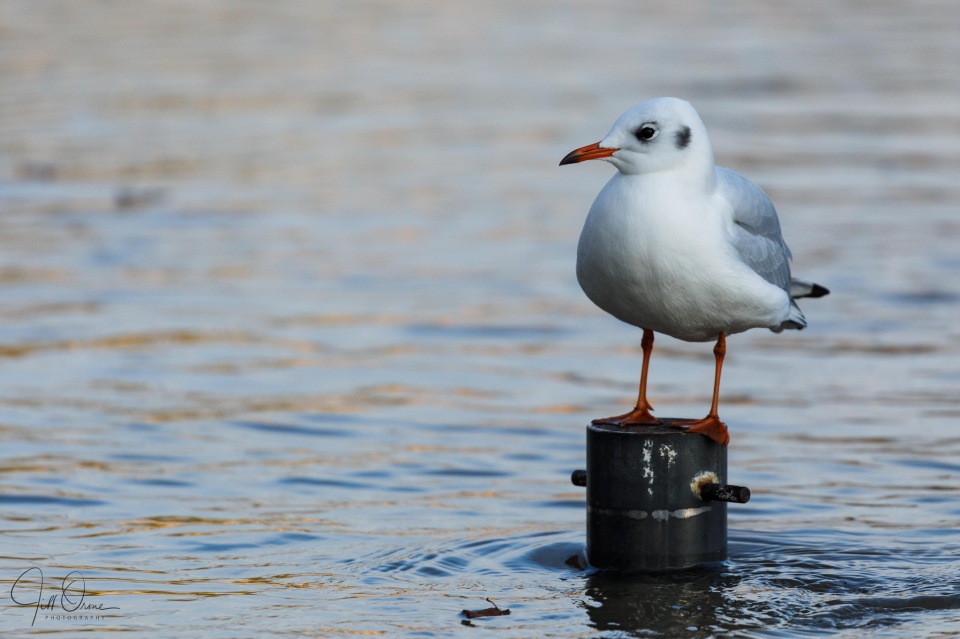 The flooding in the village has receded, but the Avon is very high along the whole of its local length, and out of its normal bounds in a number of places. This black-headed gull is standing on top of what would normally be a mooring post, embedded in the quay at the edge of the Bancroft Gardens in Stratford-upon-Avon; now, as you can see, it’s in the river, and merely useful as a dry perch.

I had hoped to be able to walk along the opposite side of the river this afternoon, because it’s easier to capture nice late light from that angle; but from where we’d parked the car in Old Town it wasn’t possible to access the far bank: the bottom quarter of the lane going down to Lucy’s Mill Bridge is flooded, and as I was wearing walking shoes rather than wellingtons the prospect of wading was not enticing. So I stuck to the north side – though even there I had to veer away from the river bank in places, because the water was completely over the path. Luckily it wasn’t too deep in the Bancroft Gardens, and when I spotted the mooring posts in the water, and realised that it was likely to be just a matter of time before a gull landed on one of them, I was able to get to a nearby bench, sit down, and wait until my subject obliged.

I know that gulls aren’t everyone’s cup of tea, but I have a sneaking fondness for the black-headed ones, which are less aggressive than their larger cousins, and – I think – rather handsome. This bird is fully mature, as shown by its red legs and bill; next spring its head will go dark chocolate brown with a white ring around the eye, but for the rest of the winter it will wear this plumage, with just two dark smudges on each side of its face. According to the RSPB around 140,000 pairs of black-headed gulls breed in the UK, but in winter holidaymakers from Iceland, Russia, and Northern Europe swell that number to over 2 million birds. Small as they are, these little gulls must be quite tough, because they’re surprisingly long-lived, with the oldest known individual having made it past the age of 30.

This evening R and I have been to the cinema to see Official Secrets, which I recommend. I’ve never been a fan of Keira Knightley – generally agreeing with Mark Kermode, who for years referred to her as Ikea – but I believe this is now the second time I’ve enjoyed one of her films. Of course, the the rest of the cast being excellent definitely helps, as does the fact that being petrified for much of the proceedings, she has good reason for acting like a flat-pack wardrobe – but still. The film is worth seeing.