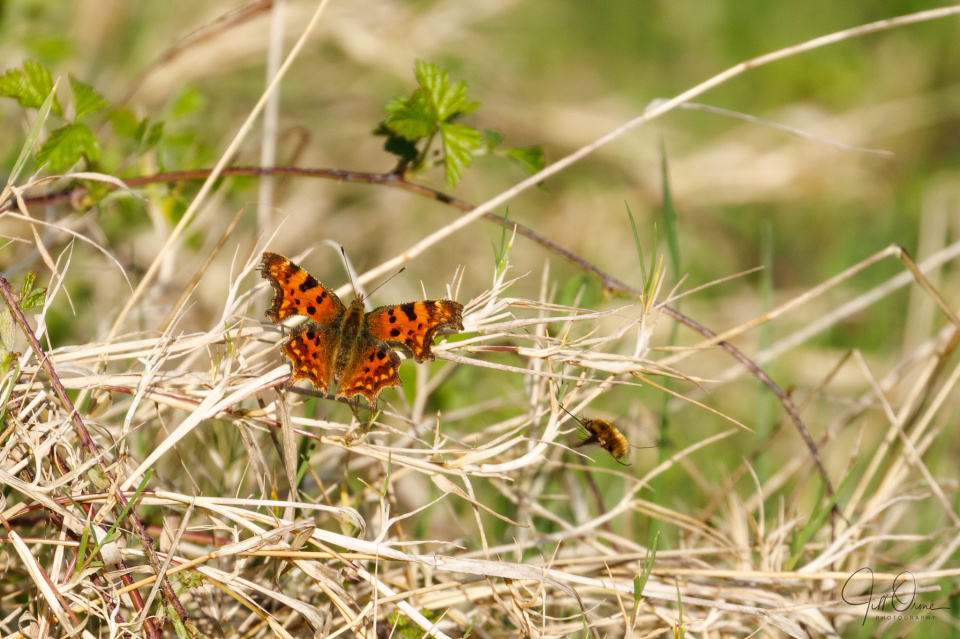 After two days of garden bug safaris I felt like getting out and about; so I zoomed over to Gloucestershire, where several garganeys have recently been reported at the Coombe Hill reserve. I’d never been here before, and I had an interesting afternoon because it’s quite unlike most of the nature reserves that I visit: it spans the Coombe Hill Canal, and a series of water meadows that act as a flood plain on the east side of the River Severn, and it’s a haven for both birds and invertebrates. I would expect that in a couple of months it will be teeming with dragonflies, and I’ll definitely be making a return trip then.

Today I found the garganeys I was looking for – but at such a distance that even my record shots were pretty poor. But I managed much better photos of a chiffchaff, some fieldfares (which surprised me because I’d have expected that they would have migrated by now), a long-tailed tit, and a heron that was fishing the canal as I was walking back towards the car park.

Any of those might easily have been today’s blip, and I’m a little surprised to find myself posting these insect shots – especially as I didn’t have a macro with me, and they were taken with the long lens. But while I was creeping up on the Comma in my main image, I was amused to spot that it was also being stalked by a couple of bee flies, and I thought you might find this behaviour as interesting as I did. At this point the butterfly had already shaken its wings to deter the bee flies once, but this one was coming round for a second look; and though I’m sure it was only being curious, its tusk-like proboscis made me think of a swordsman, or maybe a knight with a lance, getting ready to attack. 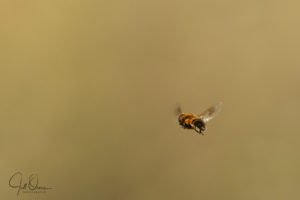 My extra is an Eristalis pertinax hoverfly, which was also exercising its curiosity – but this time about me. I’m used to being on the receiving end of this behaviour, but it usually happens on a lazy summer afternoon, when the drone flies are hanging around the garden, seemingly with nothing to do, and decide to take an interest in my gardening activities. This one flew a little way in front of me, at head height, for about a hundred metres along the canal path; and when my camera battery ran out and I stopped to change it, the fly stopped too, hovering close by and only flying on when I began walking again. Whenever I stopped to take its photo it would move up, down, or sideways, out of the “line of fire” of the lens, but if I waited for a few seconds with the camera raised it would return to its previous position; I should probably let you think that this was an incredibly difficult shot to take, but in truth the hardest thing about it was the fact that I couldn’t use the autofocus on something so small, and had to focus manually.