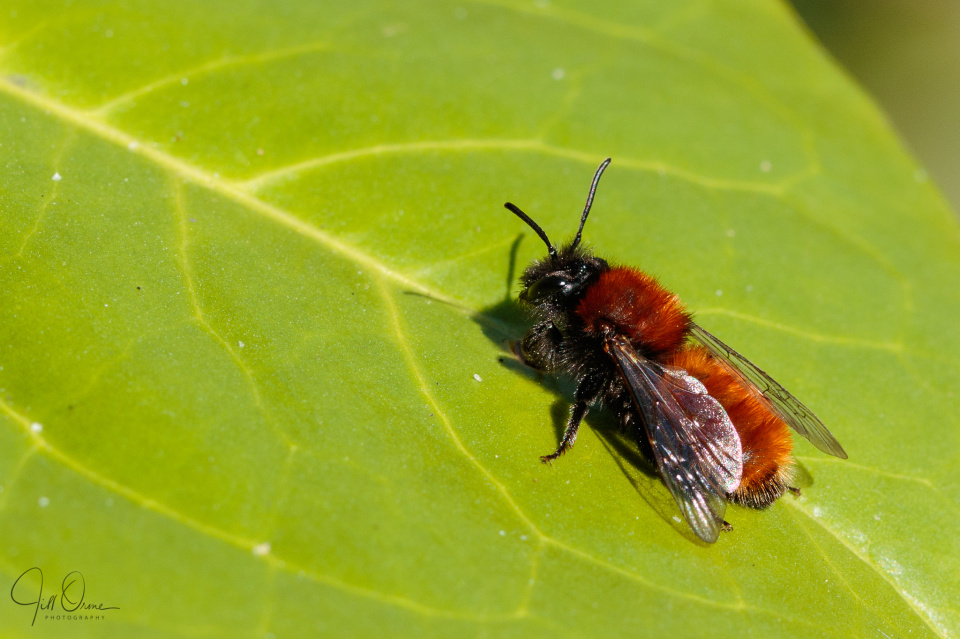 This is my first female Andrena fulva of the year, and I think she’s gorgeous in her red and black plush outfit. She’s about the size of a honey bee, and with that dramatic colouring is one of the most easily identifiable of the mining bees; the male is harder to spot, being smaller and browner, though he does have some distinctive facial features if you can get close enough to see them.

Getting close to any of the newly-emerged solitary bees is a bit of a challenge at the moment – though that’s really hardly surprising. I spend quite a lot of time during the bug season contemplating metamorphosis, and thinking how strange it must be, after getting used to living your life in one state, suddenly to find yourself turning into something else. This bee has just emerged from an individual cell in an underground nest that was dug by her mother last spring; she developed first as an egg, and then as a larva – eating pollen that was left in the cell for her by her mother – before pupating over the winter. I have no evidence at all that bees experience existential angst, but I still think it must be quite odd to go through that underground development, and then suddenly develop an urge to dig your way to the surface, only to discover that you can now fly. And even if they’re not coded for philosophising, bees are wired up to understand that anything bigger than them might eat them, so a large photographer is bound to be viewed with suspicion.

Last week the only solitary bees in my garden were the hairy footed flower bees, but over the past two days there has been a mass emergence of mining bees, and they’re all currently extremely skittish as they get to grips with their new lives. Almost all of them are males, which generally emerge first, and they’re looking for females and trying to establish and defend little territories; thus they spend a lot of time zooming about and shoulder-charging each other. This female – one of two I found today – was so fresh that I don’t think she’d yet allowed herself to be mated: she was alternately flying about quite erratically and then landing and basking on this laurel hedge, but as you can see she wasn’t collecting pollen, and I didn’t even see her feeding. When she has mated she’ll start to make and provision her nest, and will become very intent and purposeful, and while she’s browsing flowers and collecting pollen she’ll be easier to photograph.

There’s a rather sweet photo of a tawny mining bee emerging from her burrow on the Buglife page, if you’re interested. The soil in that photo looks like a rather nice, friable loam, but here in the Shire we go in for thick, heavy clay, and it seems to me that the mining bees of Worcestershire must have muscles of iron.