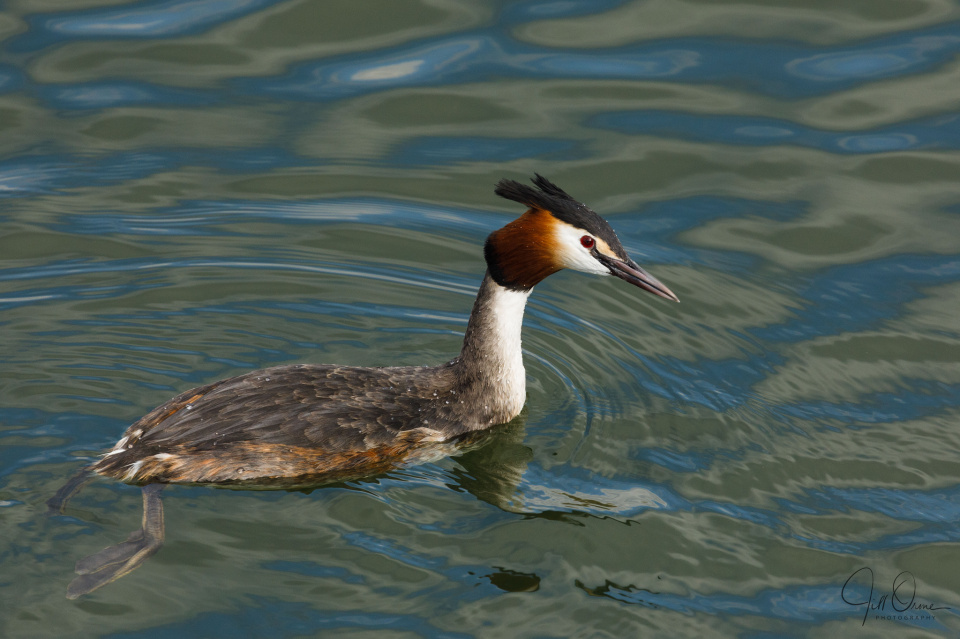 Not than I’m moaning (I never moan, as you know), but… you wait two years for a half decent photo of a great crested grebe, and then 78 come along at once. So today’s processing may take a while – but in the interests of getting some sleep tonight I’ve pulled out two shots, one for posting here and the other for my Facebook page.

R and I went to Compton Verney this morning, to see their exhibition Painting Childhood: From Holbein to Freud, which I thoroughly enjoyed. There’s a Van Dyck portrait that on its own is worth the admission, and an oil sketch for the same portrait that I had to discourage R from stealing; poignant family pieces by Constable and Pisarro; Millais’ Bubbles; stuff by Gainsborough, Reynolds and Alan Ramsay; a le Page that I also had to discourage R from stealing; and lots more besides, including a sister exhibition of contemporary works which includes some of Mark Fairnington’s extraordinary portraits of his twin sons. Even if you’re not a member at Compton Verney I highly recommend it – and if you are a member, it’s a no-brainer: just go.

When we left the house we headed for the lake so that I could look for the great white egret that’s been seen there for the past couple of days, but there was no sign of it. There were three great crested grebes, all wearing their breeding hats, but engaged in parallel play, and none seeming remotely interested in either of the others. I can only distinguish between a male and a female crested grebe if I see them together – which I didn’t at any point today – so it could be that they’re all the same sex. Or maybe they’ve taken a vow of chastity, or the sap isn’t yet rising in Warwickshire – whatever, they were not courting.

The usual policy of the grebes at Compton Verney seems to be to stay in the geometric centre of the lake, too far from land for detailed photos, and two of them were doing that today, but this one went off piste and approached the bridge just as R and I were crossing it, allowing me some quite close shots. A party of schoolchildren then approached, and I thought Well, that’s that then – but though the grebe was unsettled it chose to swim under the bridge and into a rather nice patch of light on the other side, rather than removing itself to open water.

I’m posting this image not just because I like it as a portrait, though I am quite pleased with it, but because it’s the first time I’ve ever seen a great crested grebe’s feet, and I find them fascinating. Firstly because they’re humongous, and now I’ve seen them I understand how this bird can move as fast through the water as it does. And secondly because you can see quite well in this image that they’re set a really long way back on its body – something that I knew in theory, but again, had never actually seen before. Having the legs and feet set so far back helps the bird to swim efficiently, but means that the great crested grebe can’t walk very well; it therefore avoids being on land, and a breeding pair will build their nest in vegetation such as a reed bed at the edge of their territorial water.

The photo I’ve put on Facebook this evening was taken a few minutes after this one, and just after the grebe had dived and come up with a fish. I watched it juggling its victim for a few seconds before realising that it wasn’t trying to get it into the right alignment for swallowing, but was in fact playing with it – something else that I’ve never seen before today. The dunking and juggling went on for a couple of minutes – the fish, I’m pleased to say, appeared to be stone dead throughout – and then the grebe apparently lost interest, dropped it for the last time, watched it gently sinking, and then calmly swam away.

Every time I look at those feet, I find myself humming this.