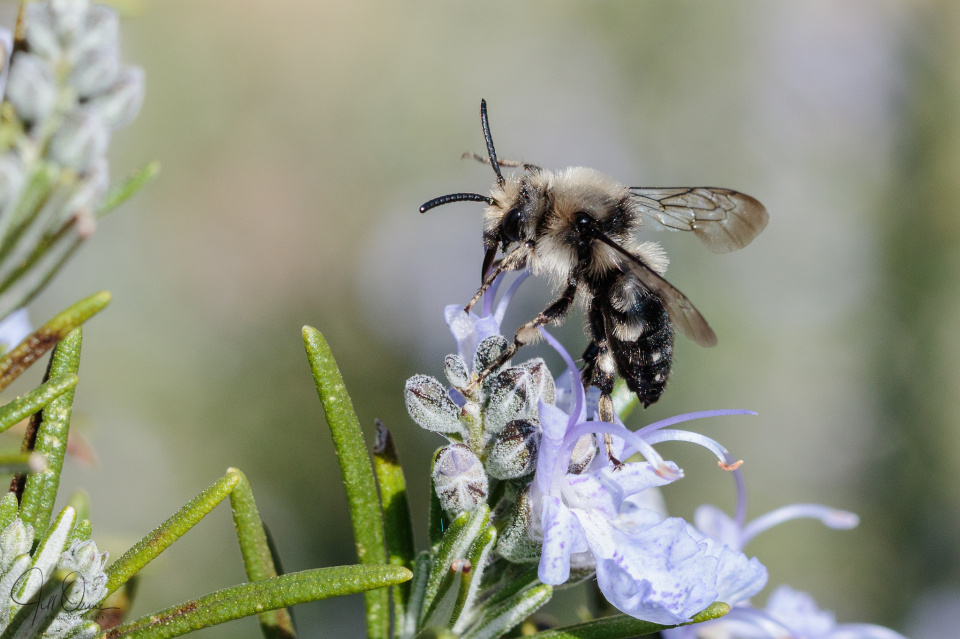 Yes – hello to you too. You didn’t have to stand on top of the rosemary and wave at me, actually: I’d already spotted you.

The first site I checked for invertebrates today was this large rosemary bush, which is thriving in the sunny, gravelled yard where we park our cars. I immediately realised that the four black and white bees that were almost dementedly scouring it for nectar were far too big to be ashy mining bees, which meant that they had to be common mourning bees (Melecta albifrons) – but they were moving so fast that it took a few minutes for me to achieve the necessary confirmatory photos.

Steven Falk, in his Field Guide to the Bees of Great Britain and Ireland, states that male and female M. albifrons are difficult to tell apart; but while I hesitate to contradict an expert, I’ve always followed the rule of thumb suggested by NatureSpot that the female is darker than the male – and, I would say, larger and uglier too. And given that I’ve been reporting them this way for the past few years, and all my records have been verified without comment, I’m happy to stick with that principle – which means that the bee in my main image is a male, and the one in the extra is a female. Usually I see the males around for a week or so before spotting my first female, but today both sexes appeared at once, with the males outnumbering the female by three to one.

Melecta albifrons is a cleptoparasite of our little friend the hairy-footed flower bee. The female will seek out a plumpie nest, make an opening into one of the cells, lay her own egg in it, and reseal it; the mourning bee egg hatches before the A. plumipes egg, and the larva eats the host and then the food supply that was left for it. Although this is bad luck for the bee whose hard work is subverted to the benefit of another species, overall Melecta albifrons occurs at too low a frequency to present a threat to a healthy population of Anthophora plumipes.

I still can’t pretend to approve though.