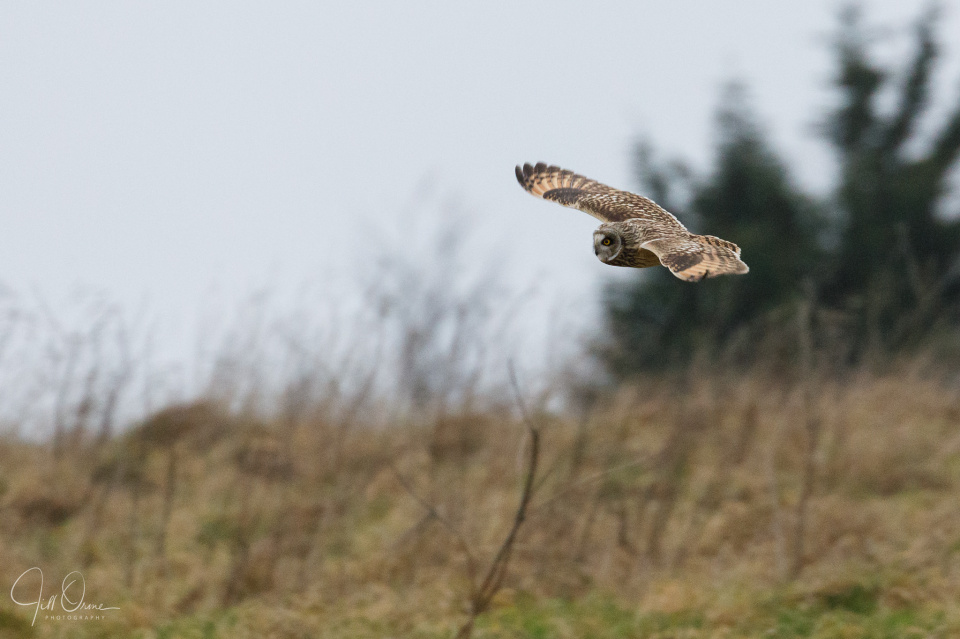 The light was appalling this afternoon, but after a morning sitting at my desk I was raging to go out, and I thought it might be worth a trip to the owl field. All owl-fanciers have signs that they go by, and the runes I was reading were as follows:

1. It rained yesterday, which would have kept the owls in their burrows, so they would most probably be hungry today.

2. More rain was due tonight, which they would be able to sense, so they’d know that they needed to get their hunting done before dark.

3. Although it was heavily overcast, the air was was quite still: short-eared owls have very acute hearing, which they use to pinpoint the position of their prey in rough pasture, but this sense is disrupted by strong or gusty wind, so they don’t tend to fly much when it’s windy – as it’s forecast to be tomorrow.

When I pulled into the lane by the owl field there was only one other car there, but B and I were both pretty sure that our rune-casting had been accurate, not least because there was a grumpy-looking owl already up and sitting on one of the posts in the middle of the field. A couple of other folk arrived over the next half hour, but at all times this afternoon humans were outnumbered by owls, of which five were flying. Conditions for photographing them were a long way from ideal, but you can’t have everything; it was still a pleasure and privilege to watch them going about their business.

This was one of my better flight captures, taken at about 3pm when it was almost too dark for my eyes to pick out the owls against the trees – so I’m grateful to the autofocus for helping me out. The extra is one of those “bird on a stick” shots that camera club judges tend to turn up their noses at, but I’m going to assert that an owl on a stick is entirely acceptable. This one appears to have been wearing half a field, but wasn’t obviously incommoded by it. 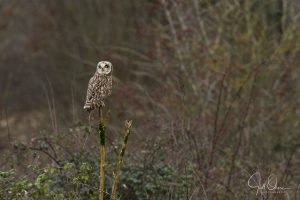