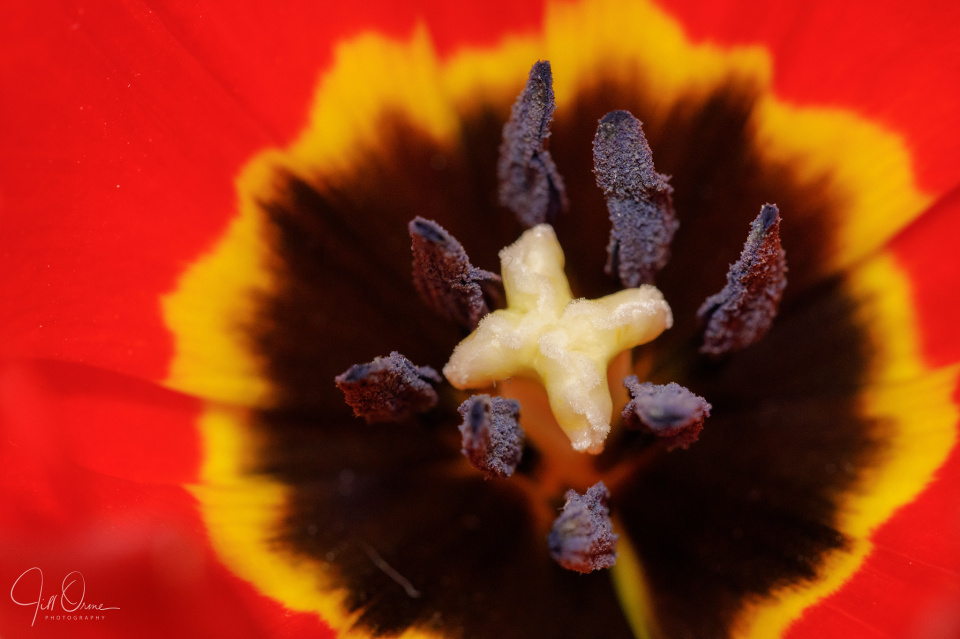 I don’t know when winter tulips became a thing, but I’ve been seeing them in various shops round here since about the middle of last month. They’re supposedly British-grown and not imported, but that suggests that large amounts of light and heat may have been needed, to force them out so early. Which of course makes me feel guilty. I don’t subscribe to the theory that once something wasteful has been produced you’re doing no extra harm by buying it: my view is that you’re adding to a demand, which someone is going to be encouraged to keep fulfilling.

Anyway. Having succumbed, I’ll sit in the dark for a while, to try to compensate.

They’re about a week old now, having been bought to go on the table during our second, “pretend” Christmas last weekend. And very nice they looked, in a green and white jug. By this morning they were clearly starting to go over, but I thought I might be able to get a close-up shot of one of the centres before they collapsed. The weather was so bad that I had to light it with the Lumimuse, and I’m not fully convinced that I like the result, but at least I was saved from having to take a camera out with me when I went to Stratford for physiotherapy.

The only other thing I have to share with you today is the sad news that Creepy Pasta Salad didn’t manage to make the transition from being BAFTA-shortlisted to getting onto the nomination list. As the Mother of the Director I had a few things to say about this, as you’d probably expect, but none of them could honestly be described as “being excellent” – so I’ll confine myself to saying that as far as I’m concerned, she’s very much a winner. I’ll link you to the film as soon as it’s fully available on line.